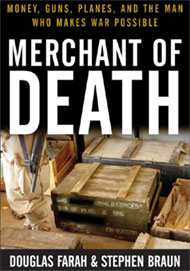 Former Soviet military officer Viktor Bout, the inspiration for Nicholas Cage’s character in the Lord of War, remade himself as an international arms dealer and blood diamonds trafficker following the break-up of the USSR. Using his air charter business to smuggle weapons into the world’s conflict zones (circumventing U.N. embargoes), Bout traveled the world with a precious gems expert and accountant in tow, supplying arms to a notorious clientele: Liberia’s Charles Taylor, a cast of Congolese warlords, and the Taliban, among others. More surprising, journalists Douglas Farah and Stephen Braun report in their new book on Bout, Merchant of Death, is that the shadowy Tajik-born arms dealer has also provided his services to the U.S. military and several U.S. contractors in Iraq, including Halliburton parent company Kellogg, Brown & Root. Laura Rozen interviewed Farah via email.

Mother Jones: How did Viktor Bout get his start as an international supplier of arms, ammunition, and transport services?

Douglas Farah: Viktor Bout was a unique creature born of the end of Communism and the rise of unbridled capitalism when the Wall came down in the early 1990s. He was a Soviet officer, most likely a lieutenant, who simply saw the opportunities presented by three factors that came with the collapse of the USSR and the state sponsorship that entailed: abandoned aircraft on the runways from Moscow to Kiev, no longer able to fly because of lack of money for fuel or maintenance; huge stores of surplus weapons that were guarded by guards suddenly receiving little or no salary; and the booming demand for those weapons from traditional Soviet clients and newly emerging armed groups from Africa to the Philippines. He simply wedded the three things, taking aircraft for almost nothing, filling them with cheaply purchased weapons from the arsenals, and flying them to clients who could pay. His background is difficult to ascertain. He is said by U.S. intelligence officials to be the product of an “immaculate conception.” He was not, and then he was. He has provided no stories of his youth, very few personal details. He was, according to his multiple passports, born in 1967 in Dushanbe, Tajikistan, the son of a bookkeeper and an auto mechanic. He graduated from the Military Institute on Foreign Languages, a well-known feeder school for Russian military intelligence, and is known to have a true gift for languages.

MJ: What is the evidence of a relationship between Bout and Russian military intelligence, the GRU?

DF: It is highly unlikely he could have flown aircraft out of Russia and acquired huge amounts of weapons from Soviet arsenals without the direct protection of Russian intelligence, and, given his background, the GRU seems the most likely candidate. He was providing not solely AK-47s and massive amounts of ammunition, as his competitors were, but attack helicopters, anti-aircraft systems, anti-tank mine systems, sniper rifles, and items that are much harder to acquire. The clearest, most recent direct tie came through an obscure investigation in the United States carried out by the Bureau of Alcohol, Tobacco, and Firearms. Last year the ATF was investigating sales of $240,000 worth of night vision scopes and paramilitary gear from a small sporting goods store in Pennsylvania, and discovered that the items had been illegally shipped to a company that is controlled by an elite Russian intelligence counterterrorism group. The money was paid through a Bulgarian holding company controlled by Bout.

MJ: Your reporting indicates that Bout has supplied not only the Taliban, Liberia’s Charles Taylor, and Congolese warlords, but the U.S. Army and its contractors as well. Can you describe how the U.S. government and U.S. contractors have responded to revelations about who they are doing business with?

DF: The U.S. government response to revelations of the use of Viktor Bout to fly for government contractors in Iraq (not just a few flights, but hundreds, and perhaps a thousand) has been mixed. Bear in mind most of these flights occurred after President Bush had signed an executive order making it illegal to do business with Bout, because he represented a security threat to the United States. The State Department, under a congressional inquiry initiated by Senator Russell Feingold, found it had used Bout companies, acknowledged it, and stopped. Paul Wolfowitz, while at DOD, did not respond to queries for nine months, then acknowledged that DOD contractors had subcontracted to Bout companies. Despite the public revelation, the congressional inquiry, the executive order, and a subsequent Treasury Department order freezing the assets of Bout and his closest associates, the flights continued for many months, at least until the end of 2005. The Air Force cut him off immediately, but other branches of the military continued to use him.

MJ: Any evidence that Bout is authorized by governments to play this murky role because he is as useful as he is dangerous?

DF: Bout, through an intermediary, approached the CIA and FBI immediately after 9/11, and offered his services in helping to oust the Taliban if he were paid tens of millions of dollars for his efforts. Negotiations were serious and lasted several months, but we do not know what, if any, parts of the deal he offered were accepted. There is no doubt he has benefited from the schizophrenic policies of the U.S. government (the Treasury and State departments going after him, while DOD pays him money to fly), but it is difficult to say whether that is the result of calculation or just sloppiness.

MJ: Is he actually under indictment anywhere?

DF: There is an Interpol Red Notice on Bout issued in 2002 requiring his arrest, requested by the Belgians for money laundering. The Russians have not honored it.

MJ: Where does he reside and how easily does he move around? What countries’ passports does he travel on?

DF: He resides in Moscow and travels abroad with some frequency, despite being on a U.N.-sanctioned travel-ban list. He has had five different passports we know of, all from the USSR or Russia, but there could be more.

MJ: What does it mean that he can operate through a string of front companies so successfully?

DF: Bout’s ability to continue to function shows primarily that the post-Cold War, state-centric view of the world and transnational threats has been rapidly and totally outstripped by the rapidly changing world. Intelligence services and law enforcement agencies are operating in the 20th century, while Bout and those like him are operating in the 21st. With the ability to register aircraft on line, move money electronically in the blink of an eye, and set up proxy shell companies around the world, he will remain far ahead of efforts to stop him unless he gets sloppy.

MJ: What does it say about the larger system, which does not rein him in?

DF: Bout’s operations tell us that demand for important commodities, particularly weapons, is at a premium. He could arm different sides of the same conflicts because he was efficient and reliable. That is why they called him “the mailman,” because he always delivered. With the rapid proliferation of failed and failing states across the globe and the rise of religious and economic militias, guns have become a vital commodity. One of the biggest dangers is that, given Bout’s network, access, and capabilities, is that he would be ideally situated to move nuclear material or other highly dangerous weapons or components that could inflict huge damage.

MJ: You mentioned that Bout was supplying Hezbollah, presumably with authorization from the Russian government. Do you believe this indicates a kind of proxy war between the U.S. and Russia in Lebanon via Israel and Hezbollah, or that it is just a reflection of Russian defense manufacturers seeking a profit outlet for their supplies?

DF: I think it is both. Russia has long had an interest in Hezbollah and has given the group support, which it continues to do. It is clear from the large stockpiles of new armor-piercing Russian missiles that Hezbollah used last year. But such activities both project Russian power, at a time when the Putin government is desperate to project Russian power across the world, as well as provide outlets for the sale of Russian weapons.

MJ: What is the difference between the gray arms market and the black market?

DF: It is important to note, as we do in the book, that much of what Viktor Bout does is, while reprehensible, not illegal. For example, it violates international norms to break U.N. weapons sanctions on a given country, but there is no penalty attached to those violating the sanctions regime. What specific crime was committed in what country? If a weapons merchant uses a forged End User Certificate to purchase weapons, should the country selling the weapons be penalized, should the merchant be punished, or should the country of the forgery be pursued? The answer, of course, is none of the above. No one is penalized, although the law was broken numerous places. This is the grey market, where one may know the weapons are destined for Liberia, but the EUC says it is for Rwanda, and the Bulgarian company selling the weapons, while knowing the EUC is likely a forgery, proceeds with the sale anyway. The black market is selling weapons in a clearly illegal and punishable way.

MJ: What’s been the reaction in U.S. government circles to your book? Is there more U.S. and international resolve to constrain Bout, or the same half measures?

DF: There has been no official reaction. Treasury and those who went after Bout are happy; there are some in the Pentagon who are chagrined. The embarrassment factor for dealing with Bout is pretty high now, at least in the U.S., and there are greater efforts to make sure he is not paid with U.S. taxpayer dollars. But no pressure has been brought to bear on Russia to turn him over or rein him in, and, like the United States, much of the rest of the world wants to pretend he doesn’t exist.