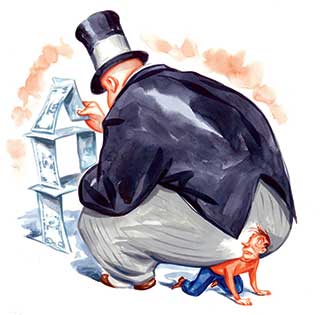 History is pretty clear on this one: Whenever the finance industry discovers a path to quick investment riches for a select few—S&Ls, junk bonds, Long-Term Capital Management, Enron, the list goes on—a massive reckoning can’t be far behind. Today’s implosion in the making? Private equity, an investment category that is quietly reshaping the entire economic landscape thanks to tax giveaways and an aggressive strategy to escape regulatory oversight.

Private equity isn’t new—it’s been around in various forms for almost 25 years, including the Barbarians at the Gate-style hostile takeover of rjr Nabisco by Kohlberg Kravis Roberts (kkr) in 1989. But it’s never operated on the scale it does today. Cerberus Capital Management, a 15-year-old private equity firm, bought 80 percent of Chrysler this year; the companies in its portfolio have more than $60 billion a year in revenue. Lou Gerstner, former ceo of ibm, now heads the Carlyle Group, a Washington-based global private equity firm whose 2006 revenues of $87 billion were just a few billion below ibm‘s. Carlyle has boasted George H.W. Bush, George W. Bush, and former Secretary of State James Baker III on its employee roster; not to be outdone, Cerberus’ payroll includes former Vice President Dan Quayle and former Treasury Secretary John Snow. And in a nice bit of political irony, kkr recently hired former Republican National Committee chairman Ken Mehlman to provide “political intelligence” on where to invest in case of a Democratic sweep in 2008.

During their salad days in the 1990s, private equity firms were consummate treasure seekers. Spawned from the family of hedge funds (the difference is that private equity goes after brick-and-mortar companies, while hedge funds trade liquid assets like stocks, commodities, and derivatives), these firms focused on picking up private companies with “upside” potential; after reworking finances and replacing management, they’d flip them at a profit.

Then came the stock market dip of 2001 and 2002, which prompted the Fed to lower interest rates dramatically. Suddenly private equity discovered a less labor-intensive way to turn a profit: With credit suddenly cheap, they would leverage debt to buy large, public companies, take them private, chop them up, and resell the pieces. Then they used the interest to offset taxes; better yet, because they were structured as private partnerships, they (and their individual executives) could classify their profits as capital gains (taxed at 15 percent) rather than as corporate income (35 percent). Presto! An almost 60 percent tax differential. Plus, when they took a public company private, its profits could get the same treatment. Thus, doing zero restructuring or resale work, and adding no value, the firms were making money—and that was before they collected their broker fees. As an added bonus, as private companies they didn’t have to file with the Securities and Exchange Commission, worry about the transparency rules of the 2002 Sarbanes-Oxley Act, or bother with pesky shareholder activists. 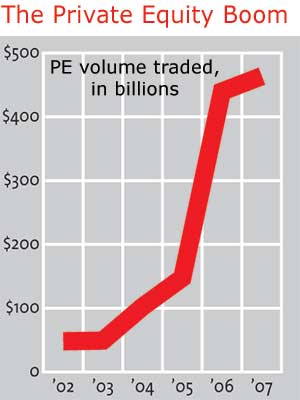 In addition to creating a bull market in Manhattan triplexes, Greenwich estates, and Gulfstream jets, the private equity boom has brought about a major shift in America’s corporate landscape. In 2006, private equity firms did nearly one-third of the record $1.5 trillion in U.S. mergers and acquisitions—triple the share from 2005—and this year’s percentage could be even higher. The trend also further reduces the already-meager income taxes corporations pay. (As it stands, corporate America contributes 7 percent of the nation’s total tax burden, compared with 50 percent after World War II.)

This might seem like a logical area for a Democratic Congress to step in. Or perhaps not: On July 31, 2007, the Senate Finance Committee hosted a contingent of private equity and hedge fund execs, among them the managing director of the Carlyle Group, Bruce Rosenblum, who also chairs an industry trade group. If senators went along with a House measure to eliminate the industry’s sweetheart tax status, Rosenblum warned, “there will be deals that don’t get done, entrepreneurs that won’t get funded, and turnarounds that won’t get undertaken.”

Members agreed. Christopher Dodd (D-Conn.), who is not on the committee but whose presidential campaign has received $41,200 in contributions this election cycle from private equity giant Blackstone (only Senator John McCain did better), fretted that a tax increase would have “adverse effects” on the financial markets. Chuck Schumer (D-N.Y.) noted that the proposed hike would raise just $4 billion to $6 billion—hardly worth bothering. The Democratic Senatorial Campaign Committee, which Schumer chairs, raised $2 million from the private equity community in the first half of 2007. During that same period, Blackstone, Bain, and the Carlyle Group alone forked over $822,000 to both Democrats and Republicans. And the industry has been spreading cash on K Street as well. Lobbying firm Ogilvy Government Relations got $3.7 million from Blackstone this year, up 15-fold from 2006.

Still, with the subprime mortgage crisis touching off broader fears about cheap credit, private equity is in the crosshairs of financial analysts and politicians alike. Already, some $60 billion in deals (including the Chrysler takeover) have been delayed and others have plummeted in value. By September Rosenblum was back on Capitol Hill trying to beat back a tax increase—and arguing that such a step would hurt retirees, because any increased costs would be passed on to pension funds and other investors.

Indeed, pension funds have a lot riding on the debate. Before I quit Goldman Sachs, back in 2002, the unit I ran started pitching “alternative investments”—a catchall category for esoteric financial products, hedge funds, and private equity. At the time, this was a tough sell. But today, pension funds allocate a remarkable 7 to 8 percent to private equity alone.

They may have gotten in at just the wrong moment. Blackstone took itself public on June 22; its ipo, the largest since 2002, raised $4.13 billion and inflated ceo Steve Schwarzman’s on-paper value to a stunning $7.7 billion. But over the following two months, Blackstone’s share price fell 40 percent. A California state pension fund, Calstrs, is a limited partner in Blackstone; it saw its $2 billion investment shrink to $1.2 billion. The lesson? Never put your nest egg in something that isn’t transparent.