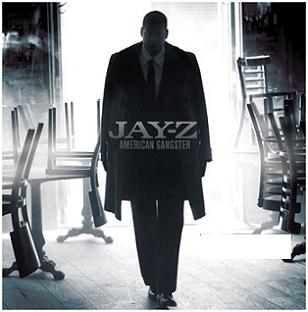 Proving once again that retiring is the best way to drum up interest in your work, America’s Richest Rapper (TM) returns with another surprisingly interesting album. Okay, sorry, maybe it shouldn’t be surprising, everything Jay-Z’s done is basically stellar, except for last year’s lazy, aimless Kingdom Come. For American Gangster, though, Jay-Z has some inspiration: the upcoming Denzel Washington vehicle of the same name. Now, this isn’t the soundtrack, but Jay-Z says each track on the album was inspired by a specific scene in the film, which he then reinterpreted through an autobiographical prism, focusing on growing up in the projects in Brooklyn. Understandably, this is emotional territory. Check out the Marvin Gaye sample in “American Dreamin'”: “Oh no/I never give up,” he sings, in a loop from 1976’s “Soon I’ll Be Loving You Again” that sounds more like a plaintive cry against greater and greater odds as the song goes on.

But don’t worry, the album isn’t all tearjerkers; the very next track, “Hello Brooklyn,” with the ubiquitous Lil Wayne on guest vocals, is all thudding bass and handclaps, with Jay-Z telling the borough “I ain’t mad at you.” While Diddy and the Neptunes take production credit on much of the album, “Fallin’,” a highlight featuring dramatic strings and a Motown-style chorus, was produced by Southerner Jermaine Dupri. On it, Jay-Z’s lyrics come fast and furious, with complicated, tongue-twisting internal rhymes, and a final denouement: “Fightin’, you’ll never survive/Runnin’, you’ll never escape/So just fall from grace.”

The title track is listed as a “bonus track” on Wikipedia; I’m not sure what that means, since the song is awesome. A funky, horn-filled sample gives it a kind of ’70s vibe, with appropriately snazzy metaphors: “The way I shine, it’s like a zillion-dollar light bill.” Jay-Z has been known for pushing the sample envelope, but on Gangster he sticks to classic soul, creatively cut up, and it gives the album a driving, urgent focus. Are we talking another Blueprint, or even Black Album? Well, probably not, but it’s another fascinating chapter in the Jay-Z saga.

American Gangster is out November 8th on Roc-A-Fella, but it’s leaking over here at mylifemyhiphop. Get it!