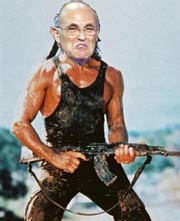 From the best Media Matters item ever:

This is the first time Media Matters for America has documented a news outlet comparing Giuliani to the fictional character John Rambo, the Medal of Honor-winning former Green Beret portrayed by Sylvester Stallone in numerous action films. However, media figures have repeatedly depicted Giuliani as a tough guy:

* On the June 12 edition of MSNBC’s Morning Joe, MSNBC host Chris Matthews called Giuliani a “street fighter,” adding, “He was there on the curb when 9-11 struck. He had soot on his face.”