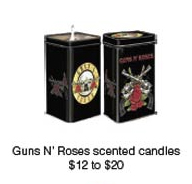 Here on the Riff, we’ve covered the thorny issue of putting your music in commercials (with commenters coming down pretty evenly split, if I’m reading their incoherent ramblings correctly), but today’s Times goes straight for the top: Duff McKagan, formerly of Guns N’ Roses, currently of Velvet Revolver, and business school graduate. The Times kind of rubs in that the dude is 43:

Like other rockers easing into middle age or seniorhood, Mr. McKagan is also experimenting with new partnerships in response to a music business in flux. Amid plunging record sales and Internet file sharing, rockers are eagerly plastering their names everywhere. Their “brands” are now found in television commercials, tour sponsorships, and merchandise as diverse as cars, private-label wines and celebrity cruises.

“Seniorhood”? Ouch. The article brings up more aging rockers who have left their youthful anti-commercial ideals behind: The Stones (Budweiser!), Paul McCartney (Starbucks!), Sting (Jaguar!). Why is everybody shilling for The Man? Because nobody’s buying records:

All of this has been set in motion by a well-known reality: record sales “fell off a cliff,” says Jonathan Daniel, a former musician and now a partner at Crush, a management company that represents such bands as Panic! at The Disco and Fall Out Boy. Shipments of CDs were $9.16 billion in 2006, down 31 percent from their peak of $13.21 billion in 2000, according to the Recording Industry Association of America.

Panic! at the Disco and Fall Out Boy: the Beatles and Stones of our generation.

It’s nice to see, then, that a few rock stars are drawing the line, er, somewhere: Trent Reznor of Nine Inch Nails won’t even make ringtones, Bruce Springsteen says he doesn’t “rent his name or stage out,” and Nicki Sixx of Mötley Crüe refused to license baby bottles, saying “I think you can go too far.”

The article, somewhat randomly, brings up Madonna’s ground-breaking deal with Live Nation; apparently even pursuing alternate modes of distributing your albums is part of the “selling out” paradigm these days. Well in that case, everyone’s a sell-out if you do any, um, selling.

While it’s both interesting and kind of depressing to see the diversity of responses to the current music industry’s complexities, the article does reassure us that there are certain places even the most publicity-starved corporation won’t go: “Good managers will not work with a band or an artist that doesn’t have their head screwed on straight,” says a law firm guy, “there’s too much money involved. They’ll reject them — no matter how talented they are.” It’s nice to know there will always be artists too fucked up to sell out.