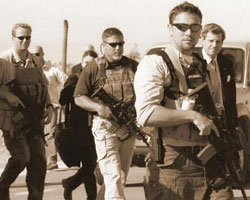 While its operators stand accused of firing indiscriminately on Iraqi civilians, killing 17 and wounding 24 in a September 16 shooting in Baghdad, Blackwater USA quietly withdrew its membership yesterday from the International Peace Operations Association (IPOA), a Washington, D.C.-based trade group that represents some of the private military industry’s biggest players. “We have decided to take a hiatus from the [association],” a Blackwater spokesperson told the Wall Street Journal, which first reported the story. “We, like many other organizations engaged in this type of work, are pursuing other aspects and methods of industry outreach and governance.” The IPOA did not issue a public statement, but Blackwater’s name and logo have been removed from the list of member companies appearing on the organization’s website. Doug Brooks, the IPOA’s founder and president, confirmed the decision by phone earlier today. He declined to comment on the details of Blackwater’s departure, but denied it had resulted from any action undertaken by other IPOA members, either by companies uncomfortable with sharing an association with Blackwater or by those who may stand to gain commercially from its demise. “They were members in good standing when they pulled out,” Brooks told me. “They made the decision.”

Blackwater was a founding member of the IPOA, which currently represents 38 companies active in what it calls “the peace and stability industry.” Having started with six companies in April 2001, the organization’s membership has grown rapidly since the U.S. invasions of Afghanistan and Iraq, as private military companies have sought the sheen of legitimacy provided by the IPOA’s well-intentioned, but largely unenforceable code of conduct, which emphasizes respect for human rights, ethics, transparency, and corporate accountability. The IPOA’s commitment to these ideals stood to be tested by the recent involvement of Blackwater operators in several controversial shooting incidents in Iraq. Just last week the association issued a press release stating that it “does not condone reckless or dangerous behavior” and acknowledging that it was “actively working with Blackwater, both through our Standards Committee and our Executive Committee, to ensure that they are fully compliant with the IPOA Code of Conduct.”

The company’s sudden withdrawal from the association, however, further calls into question IPOA’s ability to police its membership. According to Robert Young Pelton, author of Licensed to Kill: Hired Guns in the War on Terror, who shadowed Blackwater operators working in Iraq as he researched his book, the company’s abrupt departure from the trade group may be the result of pressure from the State Department, the company’s primary contracting agency, to keep a lower profile following the September 16 shootings. “Doug Brooks is pretty vocal in the media,” said Pelton. “State is usually the one that smacks Blackwater in the back of the head to say, ‘Shut the fuck up! You’re not supposed to talk while there’s a pending investigation.’ So, my guess is that this is a State-mandated decision, which is why Doug is saying nothing about it.”

Blackwater did not return a call for comment. Apart from the company’s initial statement to the Wall Street Journal, it has not commented publicly on its decision. But according to an associate of Blackwater founder and CEO Erik Prince, the company is not overly concerned about going it alone. “It doesn’t surprise me that they may have pulled out,” the source wrote in an email. “The IPOA doesn’t have any particular influence over its membership or pull on the Hill. It’s the fucking blind leading the blind.”