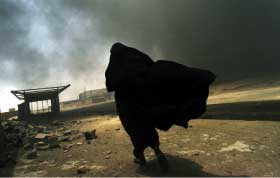 Let’s just get the wishful thinking out of the way first. Peace won’t break out if and when the United States leaves Iraq; violence will continue, and possibly get worse. That’s not a rationale for leaving the troops in place, just a hard reality. How bad, exactly, will it be? Here are four scenarios, ranging from the horrific to the somewhat hopeful.

1. Apocalypse Now
The feeble, feckless government collapses, and the militias go to war. Kurds seize Kirkuk and the northern oil fields; Sunni and Shiite Arabs fight back. Sunni forces try to take Baghdad, battling Shiite militias. In the south, competing Shiite forces battle it out for Basra while Al Qaeda in Iraq () gains a safe haven in the Sunni heartland. As the fighting intensifies, the neighbors jump in: Turkey invades northern Iraq to crush the Kurds, Iran and Saudi Arabia defend their allies, and restive minorities in neighboring countries rebel—all the ingredients are in place for a broader regional war, playing out on top of two-thirds of the world’s oil supply. Gas hits $10 a gallon.

Who’s Pushing It: Hawks who argue that the United States must stay in Iraq for many years, including the Weekly Standard‘s William Kristol.

How to Make It Happen: Pull out abruptly, without a solid international agreement in place. The resulting vacuum would empower extremists such as , ultranationalist Kurds, and the Shiite death squads, drawing more moderate factions and regional neighbors into all-out war.

The Odds: 10 percent. Not impossible, nor as likely as hawks would have you believe, in part because neighboring regimes know they could all go down if regional war breaks out.

2. Mad Max
Tens of thousands die as Sunnis and Shiites battle to control the country. But the regional powers agree not to intervene; after a time, the worst killing dies down, leaving a Somalia-style society run by gangs, warlords, and militias. To keep the slaughter contained within Iraq, U.S troops set up “catch basins” along the borders—armed buffer zones dotted with “refugee collection points,” a.k.a. camps, for those trying to escape Iraq’s hell.

Who’s Pushing It: As a worst-case possibility, this has been embraced by some realists preoccupied with preserving American influence in the Middle East, such as the Brookings Institution’s Kenneth Pollack and Daniel Byman.

How to Make It Happen: Keep supporting the ruling Shiite and Kurdish separatists, lowering the odds of reconciliation.

The Odds: 20 percent. Without outside backing, the factions will find it hard to keep up a full-scale war.

3. Partition
Iraq breaks up into Kurdistan, Shiastan, and Sunnistan, with the squabbling statelets struggling to control the country’s oil. Michael O’Hanlon, coauthor of a Brookings report called “The Case for Soft Partition in Iraq,” says up to 5 million Iraqis would be forcibly relocated; others have called it “a bad idea whose time has come.”

Who’s Pushing It: Much of Washington conventional wisdom outside the Bush administration has coalesced around partition; proponents include Senator Joe Biden (D-Del.), Leslie Gelb of the Council on Foreign Relations, Kurdish adviser Peter Galbraith, and Pauline Baker of the Fund for Peace.

How to Make It Happen: Keep arming Sunni tribes, Shiite-dominated security forces, and Kurdish militias, ensuring that each is just strong enough to hold at least a chunk of the country.

The Odds: 30 percent. The administration, the Iraqi government, and most Iraqi politicians except the Kurds oppose partition, but if no one forces the parties to the bargaining table, it’s a real possibility.

4. Let’s Make a Deal
The corrupt politicians who rode into Iraq on American helicopters—from Washington creatures such as Ahmed Chalabi to the Shiite clerics who spent their exile years in Iran—bail out as U.S. troops leave. (As Carter-administration national security adviser Zbigniew Brzezinski says, “The only Iraqis who want the United States to stay are the ones who will have to leave when we leave.”) On the Sunni side, a nationalist constellation of insurgent groups, tribal forces, and the old Baath party elite works to seek a power-sharing arrangement with the Shiites; among Shiites, nationalists eclipse the separatists and Iranian hirelings and forge a compromise. The resulting government coalition is both anti-American and anti-Iranian. It ruthlessly crushes Al Qaeda in Iraq and persuades the Kurds to accept limited autonomy rather than independence.

Who’s Pushing It: Minus the anti-Americanism, a version of this scenario is the administration’s stated goal—though actual policy undermines it at every turn.

How to Make It Happen: Support the United Nations’ effort to reengage in Iraq. Get it to convene peace talks with the support of Europe, Russia, and China, all of whom have their eyes on Iraq’s oil. Stop arming various factions and begin an orderly withdrawal.

The Odds: 40 percent. If withdrawal is done right, chances for this outcome are fair, though it would still come with a great deal of bloodshed that could easily spiral into one of the grimmer scenarios.

withdrawal will instantly make things better in Iraq may be Pollyannaish, but those who insist that the worst-case scenarios are inevitable also labor under several false assumptions. They harp on the fact that Iraq was pasted together by the British, forgetting that the “land between two rivers” has existed since the days of Babylon. They claim that Sunnis and Shiites are gripped by ancient, irreconcilable hatreds, when up to one-third of Iraq’s marriages cross sectarian and ethnic lines. Despite the growing sectarian violence, only 14 percent of Iraqis favored outright partition as recently as March of this year, and most reject the fundamentalist extremes of both Al Qaeda and Iran’s theocracy. Pessimists also ignore the fact that Iraq’s oil wealth counteracts its centrifugal tendencies. The fragile network of wells, pipelines, refineries, and shipping terminals cannot withstand civil war—and everyone wants a piece of that pie.

Fixing Iraq, though, cannot be America’s task. The United States has zero credibility to put the country back together, as do its Iraqi allies, including the current government. That leaves the rest of the world. Since 2003, Washington has treated Iraq as an American preserve. But when the troops leave, the United States will have to plead with the United Nations, the Arab League, and the Organization of the Islamic Conference to mediate among Iraq’s warring parties and lean hard on their outside supporters. If an accord can be reached, the OIC would have to marshal peacekeeping forces from Muslim countries such as Pakistan and Egypt—an unprecedented task at the scale needed in Iraq.

There will be a price to pay for all concerned, starting with massive aid from the nations interested in Iraq’s oil, including China and Japan. Iraq’s neighbors will also demand their pound of flesh, and they ought to get it: Turkey will want economic aid, E.U. membership, and security guarantees about the Kurds. The Arab states will expect a serious U.S. commitment to an Israeli-Palestinian accord, perhaps the only problem harder to crack than Iraq. Iran will want elements of the grand bargain that has so far eluded it—economic incentives and security guarantees, perhaps in exchange for limits on its nuclear research.

Even if all this can be lined up, Iraqis will be left with the tough job of hammering out a new constitution and electing a government—a process for which current U.S. policy is hardly preparing them. The counterinsurgency war has prevented the development of broad-based Sunni parties, while among the Shiites the United States has supported the most sectarian and pro-Iranian blocs, including the secretive Islamic formation of Prime Minister Nouri al-Maliki. If this continues, even a moderately optimistic scenario will begin to look like wishful thinking. 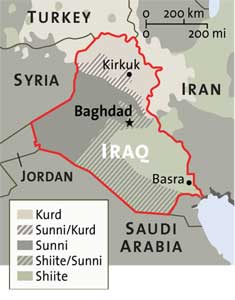