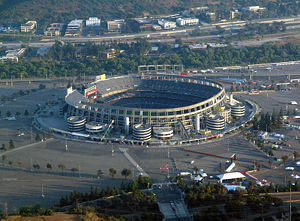 As you’ve likely heard, wildfires are shellacking San Diego. More than 150,000 acres have burned, 1,200 homes have been destroyed, and 300,000 people have been evacuated. And while the devastation is tremendous, the loss of life thus far has thankfully been only one, and those without homes, are, well, doing alright.

Last night more than 10,000 of the home-less bedded down in Qualcomm stadium, home of the San Diego Chargers (football).

Yep, professional sports stadiums are worth those taxpayer dollars in an emergency pinch, but unlike those who braved the Superdome during and after Katrina, the atmosphere at Qualcomm is, dare I say it, festive. As Governor Arnold Schwarzenegger put it in his news conference earlier today: “The people are happy. They have everything here.”

It is southern California after all—those forced to flee include Mel Gibson, Kelsey Grammer, and Victoria Principal—so should we be surprised to learn that last night bands played, gourmet food was served, and massage therapists were on-hand to assist the tanned and tattered refugees?

Now, I’ve been an evacuee myself, during the Oakland Hills fire in 1991 that flew through Oakland and Berkeley destroying nearly 3,000 homes and killing 25. It’s scary, and downright devastating for those who lose everything. I mean not to minimize their suffering, it’s just interesting to see the contrast of rock and roll playing and bellies full, with the squalor endured in a less well-heeled community when the going was just as rough.