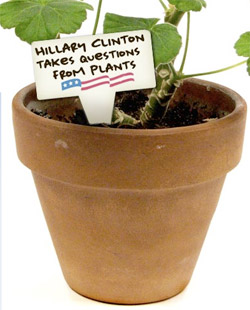 Earlier, David asked how nasty tonight’s Democratic debate is going to get. Judging from the Edwards campaign’s actions this afternoon, reeeeeally nasty.

Via an email to reporters, Edwards just announced the group “Plants for Hillary,” parodying groups like Veterans for Hillary and African-American Women for Hillary and taking the frontrunner to task for the planted question scandal that isn’t really a scandal.

There’s even a website, plantsforhillary.com, which the campaign calls the “one-stop shop for all Americans interested in growing the Hillary plant movement.” It’s pretty crude, kind of mean, and a just a little bit funny.

The campaign calls it a “grassroots” website. I think it puts a new spin on slinging mud.