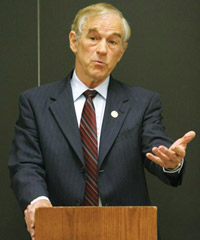 We’ve had a LOT of debate in our comments section between Ron Paul supporters and Ron Paul detractors. Supporters tout his positions on the war in Iraq and the war on drugs, and his willingness to speak honestly and directly at all times. The detractors tend to concede all of those points and then say, “Have you seen the other things the man wants to do?”

Well, now we finally have a definitive list of what those other things are. Over at the blog Orcinus, they’ve put together a list of bills Ron Paul has sponsored or co-sponsored in his long legislative career. It gives you a great sense of what a President Paul would do on some of the issues that aren’t being highlighted in the current debate.

Some of the included are:

H.R.2597: To provide that human life shall be deemed to exist from conception.

H.R.2962: A bill to repeal all authority of the Federal Government to regulate wages in private employment. [Abolition of the minimum wage.]

H.R.1789: To restore the inherent benefits of the market economy by repealing the Federal body of statutory law commonly referred to as “antitrust law”, and for other purposes.

H.R.1146: To end membership of the United States in the United Nations.

If there are Ron Paul supporters who are familiar with all this, good for them. Everyone ought to be so familiar with the candidates they support. And I’m not a Ron Paul critic; I’ve admired and repeatedly defended him. But every single Ron Paul supporter needs to read this full list and then state if he or she still wants Paul to win the presidency. Let’s get it on.

Update: Glenn Greenwald has essential reading on Paul’s flag burning position. Thanks to Greg in the comments.