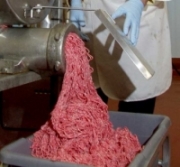 What do you do with meat that’s contaminated with E. coli bacteria? Slap a “cook-only” label on and sell that shit (pun definitely intended), says the USDA.

The Chicago Tribune reports on a little known “E. Coli loophole:” If the deadly bacteria is found in meat during processing, companies can still sell the meat if they label it as “cook-only.” The reasoning seems sound, since cooking kills the germs, but inspectors say the practice is more dangerous than it appears:

E. coli has been making headlines a whole lot lately. First there was the spinach scare; then the Topps recall; and just a few weeks ago, the Cargill recall. There’s no evidence that the cook-only loophole has to do with any of this, but it sure doesn’t make hamburgers sound any more appetizing.