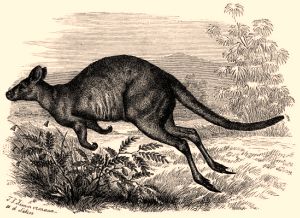 I just learned three amazing things. Number one: Agence France-Presse is not afraid to use the word “fart” in a headline. Number two is described in the aforementioned AFP story:

Australian scientists are trying to give kangaroo-style stomachs to cattle and sheep in a bid to cut the emission of greenhouse gases blamed for global warming, researchers say.

Thanks to special bacteria in their stomachs, kangaroo flatulence contains no methane and scientists want to transfer that bacteria to cattle and sheep who emit large quantities of the harmful gas.

That’s one for the wacky fixes for global warming file. And the third amazing thing? Aussies’ love of ‘roo meat:

Another group of scientists, meanwhile, has suggested Australians should farm fewer cattle and sheep and just eat more kangaroos.

The idea is controversial, but about 20 percent of health conscious Australians are believed to eat the national symbol already.