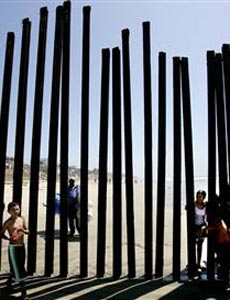 As you may have heard, Mike Huckabee recently got the endorsement of anti-illegal immigration wackjob and Minutemen founder Jim Gilchrist. Matt Yglesias observes that this puts Huckabee in a good place: “a preacher flanked with an anti-immigrant vigilante on one side and Chuck Norris on the other is sort of the ultimate Republican primary candidate.”

Huck’s going to need all the help he can get on this issue. He’s got a soft record on illegal immigration but a hard new stance (that includes forcing every illegal immigrant in the country to leave within 120 days). Many are stunned that Gilchrist would endorse the formerly compassionate Huckabee. (Like my framing?)

But the broader point is about immigration’s insanely disproportionate significance in this race. This simply is not an issue the nation cares about. According to this chart of nationwide polling numbers, three things are important: national security, the economy, and health care. And yet, as the LA Times puts it, “More than any other question, Republican presidential candidates are asking voters to consider a single issue in the weeks before primary voting begins: Who detests illegal immigration the most?”

Ryan Lizza takes a stab as explaining it in the New Yorker:

Anti-immigrant passion also owes much to the disproportionate influence of a few small states in the nominating process. National polls show that, as an issue, immigration is far behind the Iraq war, terrorism, the economy, and health care as a concern to most Americans; a recent Pew poll shows that, nationally, only six per cent of voters offer immigration as the most important issue facing the country. But in Iowa and South Carolina, two of the three most important early states, it is a top concern for the Republicans who are most likely to vote.

It all, once again, comes back to Iowa. The Des Moines Register debate occurring later today in Iowa will likely focus on immigration to the exclusion of other issues. Enough already! God bless John McCain for speaking the truth:

“It’s the influx of illegals into places where they’ve never seen a Hispanic influence before,” McCain told me. “You probably see more emotion in Iowa than you do in Arizona on this issue. I was in a town in Iowa, and twenty years ago there were no Hispanics in the town. Then a meatpacking facility was opened up. Now twenty per cent of their population is Hispanic. There were senior citizens there who were—’concerned’ is not the word. They see this as an assault on their culture, what they view as an impact on what have been their traditions in Iowa, in the small towns in Iowa.”

I too have observed that Iowans have a bizarrely strong distaste for illegal immigrants, considering how few illegal immigrants there actually are in their state. As I said a while back, “It’s almost like there is an inverse proportion between how often you see or interact with illegal immigrants in your community and how much you oppose their presence in the country.”

We can only hope that when the primaries are over and Iowa fades in the rear view mirror, the nation can turn to more important concerns.