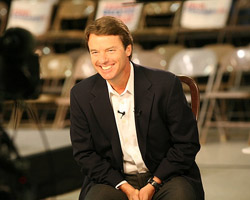 CEDAR RAPIDS, IOWA —Campaigning in Iowa, John Edwards spends a great deal of time talking about the extremely poor. He talks about veterans who live under bridges and parents who choose between food for their kids and heat in their homes. Eradicating poverty, he says, “is the cause of my life.” But, a voter can ask, has it always been so? Or has he only become an anti-poverty crusader as a presidential candidate? Sincere or not—and he sure seems sincere—is his help-the-poor message the best way to connect with Iowa Democrats? In fact, Edwards’ campaign events in Iowa, heavy with union workers and members of the middle class, contain few people without a roof over their heads or food on the table.

Members of those audiences don’t mind, however. The rhetoric shows Edwards’ commitment to fighting for the little man. “I find it appealing,” said Nancy Gruwell, a health care worker and committed Edwards supporter. “He wants to help everyone. People who are in poverty probably had really good jobs and lost them.” It was a statement echoed by Edwards supporters in Cedar Rapids and Des Moines on Monday, who say Edwards’ focus on poverty is just another way of strengthening the social safety net that protects all of us. The selflessness of Edwards’ message “is one of the reasons I’m a Democrat,” said one supporter.

And then there’s Edwards’ palpable dislike for corporations. “There are very powerful forces, well-financed forces, standing between you and the future your children should have,” the candidate proclaimed at a campaign event in Des Moines. “That’s what this election is about. Unless and until you have a president of the United States who’s willing to stand up with some backbone and some guts and fight and stand up to these corporate interests,” there will never be real change.

The Des Moines Register, in its recent endorsement of Hillary Clinton, said that it found Edwards’ “harsh anti-corporate rhetoric” distasteful. Getting things done would be difficult for such a one-sided crusader, it implied. I asked Edwards about this before a rally in Cedar Rapids. “I just have a fundamental disagreement with the Register,” he replied. “I respect their views; they’re just very different from mine. I think most Americans see that corporate power and corporate greed are keeping the American dream from getting to their children. We have a fight on our hands.”

His campaign, no surprise, dismisses the argument that Edwards’ anti-corporate rhetoric makes him less electable in the general. (Corporations, though, will have all the money they need to fund attack ads against him, and millions of Americans happily go to work for corporations every day.) “His message is very optimistic about America and its future,” says spokesman Dan Leistikow. “Most Americans want a president who is going to fight for them and who recognizes that for the middle class, their interests have been ignored.”

Not all those Iowans looking him over at campaign events are so sure. When I asked James Moriarty, an attorney from Cedar Rapids and Edwards supporter, if the candidate’s anti-corporate message would hurt him in the general, he said, “I hope not.” He paused and added, “I think the difference between Wal-Mart making $12 billion and making $3 billion is a lot of people who could lead better lives and provide for their families better.”

An undecided voter named Scott Schultz, who is torn between Edwards and Barack Obama, noted, “You can’t be so anti-corporate that it alienates the corporations, and they go bankrupt or say, ‘Okay, I’ll go to Mexico.’ I think you have to work with these corporations. You have to have a strong hand with them, but by the same token, you kind of do have to work with them. You can’t just say, ‘They’re bad, evil.’ To me, that’s how the Republicans have been working, but, you know, in reverse.”

“We need to be all united together,” said Schultz’s wife, Kim, an educator. “It reminds me a little of the George Bush ‘my way or the highway’ attitude.” She added, “I understand his passion, though. Sometimes I feel the same way, too.”

Electability is a major selling point here in Iowa as the campaign enters the homestretch. Mari Culver, the first lady of Iowa, endorsed Edwards yesterday and introduced him at multiple events by saying, “John Edwards can win. He is the only Democratic candidate who can beat every Republican in the fall.” The campaign is touting a CNN poll that found that only Edwards can slay every snake in the five-headed Republican monster of Romney, Thompson, Huckabee, McCain, and Giuliani. Edwards himself points to the fact that he grew up in a small town in rural America and that he won an election in a red state (albeit only once).

Along with offering a cause (ending poverty) and highlighting a target (greedy corporations and their hit men in Washington), Edwards makes the case that he is the fighter in the race. Hillary Clinton’s top-line message is that she will “work hard” every single day for ordinary Americans. Edwards takes it one step further: He will “fight” every single day. He repeats the theme of “fight” ad nauseam.

“I still remember when I was young—I was about four, five years old—I got into a fight,” he said in Des Moines. “Came home bloody. My father sat me down—bloody, teary—he sat me down and said, ‘Listen son, don’t ever start a fight. I don’t want to hear you’re out there starting fights. But you never, ever walk away from a fight.” More fight is John Edwards’ prescription for America, and not just in the macro sense. “I want you to go out there tomorrow,” he tells his audience, “and find that kid who kicked your butt and I want you to kick his butt. And then I want you to fight with everything you’ve got [for America].”

So while Clinton presents herself as the potential worker in chief, and Obama offers himself as the candidate who can transcend the rancor and bickering of Washington, Edwards says, I want to be your slugger in Washington. Does this pugilistic populism work? Does he run the risk of turning off voters with his anger? “I don’t see him as angry so much as he’s indignant,” said Moriarty, the attorney from Cedar Rapids. “Righteously so. You don’t get anything accomplished when you’re angry. It clouds your judgment. When something offends you, in your heart, then you do something about it. I feel poverty truly offends Senator Edwards.”

I asked Gruwell, the health care worker, if Edwards’ righteous anger will scare people in the general election. “Um, yeah,” she said, embarrassed. “I think so.”

Edwards, like his rivals, isn’t going negative in these final weeks before the January 3 caucuses. But he insists his fighting attitude would allow him to better take on health care interests than his competitors.

“You cannot bring about,” Edwards repeatedly declares, “in my judgment, the change this country so desperately needs either if you take their money or if you say, ‘We’re going to sit at the table with insurance companies, drug companies, and they’re going to compromise their power away.'” It’s no secret he was referring first to Clinton, who has accepted huge sums from the health care industry, and second to Obama, who recently said he would begin health care reform by convening a meeting of all players, including the multibillion-dollar corporations, and air it on C-SPAN so Americans can see what each party is demanding and if they are negotiating in good faith. “It is a fantasy,” Edwards said yesterday. “It will never happen. I’ll tell you when they’ll give away their power: When we take their power away from them.”

In recent days, Edwards and his campaign staffers have been focusing more on Obama. But Edwards has been gentle. In response to Obama’s questions to Edwards—”Were you fighting [special interests] when you were in the Senate? What did you do [then]?”—Edwards merely cited his coauthorship on the patients’ bill of rights, which was opposed by insurance companies, and he declined to return fire. The strongest thing Edwards would say is that it is “unrealistic” for Obama to expect insurance companies and drug companies to be willing and helpful partners.

This is an interesting and somewhat definitional debate—one that has often bubbled within Democratic circles: How confrontational should Democrats be with corporate power? But in Iowa the fight is being waged on a campaign trail where other factors are at play. Nevertheless, Edwards’ message is rather clear and stark. There’s no misunderstanding it. Caucus night will show how many Democrats in Iowa are concerned about the poor, angry about corporations, and yearning to have Edwards be their fighter in Washington.