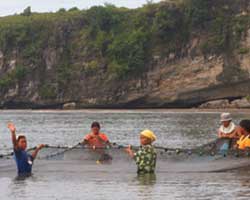 We called him Mr. Clean for a reason.

And today Rick Ness is a happy man. Newmont Minahasa Raya (a subsidiary of Denver-based gold-mining giant Newmont, where Ness was formerly president) was cleared of pollution and environmental damage charges related to Buyat Bay in Indonesia. Back in April Ness and the company were acquitted of all criminal charges (and in 2006, Newmont settled a civil suit brought by the Indonesian government on charges of environmental pollution).

The judge in the Indonesian case said in today’s ruling that “The plaintiff could not prove that Newmont polluted the environment, sickening fish and damaging coral reefs.”

But, in fact, evidence abounds.

Reuters reports that in 2004 Indonesia’s Environment Ministry found that arsenic and mercury content in waste dumped by Newmont had contaminated sediment and entered the food chain. And Newmont itself admits that it dumped 5 million tons of heavy-metal-laden mine waste into Buyat Bay, and released approximately 17 tons of mercury into the air.

Mother Jones found that “the waste on Buyat’s seafloor had arsenic concentrations 16 times higher, and mercury levels 8 times higher, than those at which adverse environmental effects are frequently expected.” A 2004 study by the Indonesian government found that wells in Buyat Village had “arsenic concentrations up to six times the Indonesian drinking water standard” and that “tests Newmont conducted before opening the mine found no arsenic.” And 17 tons of mercury released into the air can’t be good for the environment: “That’s like having 15 to 20 coal-fired power plants in your back yard.”

Central to Ness and Newmont’s defense were two reports, one by the World Health Organization (though WHO’s Asia regional office director said that the WHO report was not “sanctioned or even evaluated” by the WHO) and the other by Australia’s Commonwealth Scientific and Industrial Research Organisation (sponsored by Newmont). Independent experts reviewed the WHO test for Mother Jones and concluded that the report is “overly simplistic” and “doesn’t support its stated conclusions.” The CSIRO study’s own data on metal levels in the sediment show that the levels are many times higher than what is acceptable by North American standards.

For more detail check out this review of the scientific studies that Newmont touts.