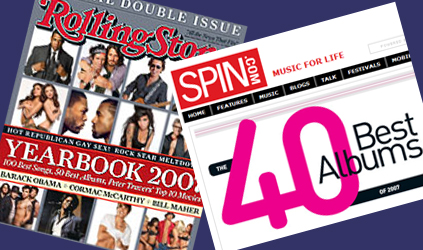 Spin, America’s Snottiest Mainstream Music Rag™, and Rolling Stone, America’s Grumpy-Old-Man-iest Music and Whatever Else They Damned Well Feel Like Publication™, just posted their best albums and best singles lists, respectively, and there aren’t really too many surprises. Spin goes out on a limb with their #1 slot, awarding Against Me’s New Wave “Best Album” honors. It’s a good CD, but the choice smacks of a certain “we’re down with the mall-rat Hot Topic punk-rock haircut emo kid crowd, please buy our magazine” desperation that Spin, in their insecurity, descends to a lot of the time. Other than that, you couldn’t get a more same-old, same-old two through ten:

Actually since they seem to just be averaging out a lot of other lists, they’re pretty much on target there, although Icky Thump should probably be at like #30.

Rolling Stone‘s best songs of the year crowned Jay-Z’s “Roc Boys” #1, and it’s a kind of random pick off American Gangster, but that’s no problem compared to their #2: Randy Newman’s “A Few Words in Defense of Our Country,” a soul-crushingly awful pseudo-political ramble that makes me want to become a Republican and go hunt cute cuddly animals just to express my sheer fury at the universe for creating such terrible crap. Wanna join me? Watch it here:

Most of these are pretty familiar territory, other than the Bright Eyes track: from Cassadaga, this sees the Omaha combo in full-on Americana territory, with a swinging, violin-led sound behind the angry lyrics: “The Bible’s blind, the Torah’s deaf, the Koran’s mute/If you burned them all together, you’d get close to the truth.” The video, in which a crowd turns against the performers, makes me really uncomfortable: