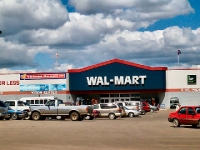 Wal-Mart’s up to its old tricks. For the fourth time in the last few years, the company has been caught selling illegal gas cans in California. The cans, which leak hydrocarbons that create smog, have been outlawed for some time in the state. This time around, Wal-Mart paid about $250,000 for violating air quality laws.

Between 2003 and 2007, the company sold about 3,000 illegal cans. Funny, since it was during those same years that the biggest big box really pumped up the volume on its environmental PR efforts. So here’s the question: How do we make sure that Wal-Mart walks its talk? Considering the fact that in 2005, the company reportedly made $20,000 a minute, it’ll take a whole lot more than a $250,000 fine, that’s for sure.