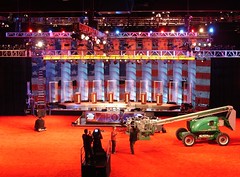 As I’ve said before, there’s been a vacuum surrounding Israel and Palestine this campaign season. Moderators have broached the issue only twice in the last 13 debates. And the most recent question, posed by Wendell Goler last week at the Fox News debate in South Carolina, was pretty weak. As Goler wound up—”Mayor Giuliani, President Bush is in the Middle East … laying the groundwork for a Palestinian state”—there was, briefly, a glimmer of hope. Then he tossed this doozy of a softball: “I wonder, sir, how you would keep a Palestinian state from becoming a breeding ground for anti-American terrorism.” One of several surreal assumptions behind the question seemed to be, “The Palestinians are prostrate, mightn’t it be better if they’re kept that way?” And that to the candidate with the Likudnik A-team advising him. Oh, well.

Since the debates have been so deficient in this area, I asked five well-informed Middle East observers what they would ask the candidates on the issue, if they could ask anything. The only ground rule was to keep it brief; no other boundaries. Here are their responses:

From Juan Cole of Informed Comment: Has Israeli colonization of the West Bank proceeded to the point where a two-state solution has become impractical? And, if so, isn’t there now a choice between an Apartheid state or a one-state solution?

From Matthew Duss of TAPPED: Recognizing that Israel’s settlements in the occupied territories are considered illegal under international law, and recognizing that their relentless expansion, which has continued over the last decade despite repeated Israeli assurances to the contrary, is both a source of Palestinian suffering and a major instigator of extremism and violence, as well as being deeply prejudicial to final status negotiations, are you prepared to take a firm stand against the settlements, and to carry through with real consequences if Israel does not cease settlement expansion?

From Trita Parsi, author of Treacherous Alliance: The Secret Dealings of Israel, Iran, and the United States: Since 1993, the United States has pursued a policy of seeking peace between Israel and Palestine by isolating Iran. As former Assistant Secretary of State Martin Indyk said, the two were symbiotic. Peace was necessary to isolate Iran, isolating Iran was necessary for peace. Fifteen years later, we can conclude that this strategy was an utter failure. Yet, the Bush Administration is following a similar path, seeking to create an alliance of Israel and Sunni Arab dictatorships to isolate Iran under the guise of peacemaking. In your administration, how would you approach the Israeli-Palestinian conflict? By repeating the Bush/Clinton policy or by pursuing a holistic approach aimed at giving all regional actors a stake in the outcome and process of peacemaking?

From Philip Weiss of Mondoweiss: Why is it that our last two presidents only made a major push on Israel/Palestine at the end of their 8-year terms, when they had nothing politically to lose? Doesn’t this show that this is the big enchilada in foreign affairs and that our politics around this issue are unhealthy? What will you do differently, before your 8 years are up?

From Stephen Zunes of Foreign Policy in Focus: For Senator Clinton. During the 2006 war in Lebanon, you co-sponsored a resolution condemning Hezbollah for its alleged use of “human shields.” Since then, detailed on-the-ground studies by Amnesty International and Human Rights Watch, while highly critical of Hezbollah’s responsibility for civilian deaths in Israel, have challenged the claims by the Bush administration that Hezbollah’s alleged use of “human shields” contributed to the high numbers of civilian deaths from Israeli bombardment in Lebanon. Similarly, the reports of these credible human rights organizations have placed responsibility for the vast majority of the 800 Lebanese civilian deaths on the government of Israel. Are you willing to acknowledge that Israel was culpable for most of the Lebanese civilian deaths? And, as president, would you belittle the findings of human rights groups in order to support violations of international humanitarian law by U.S. allies?

I’ll be sending these along to the next few debate moderators. Have a good question for the candidates on Israel? Put proposals in the comments.