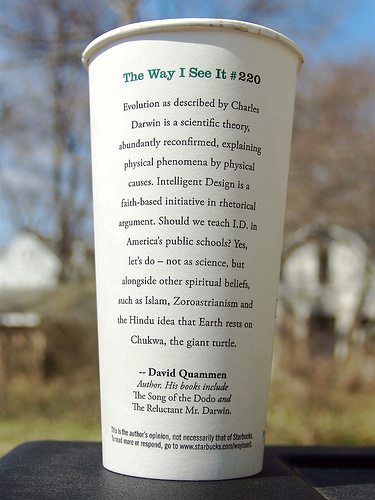 A coalition of 17 organizations calls on the scientific community to become more involved in the promotion of science education, including evolution. According to the National Academy of Sciences, the American Institute of Physics, and the National Science Teachers Association (among others), the introduction of nonscience, such as creationism and intelligent design, fundamentally undermines education—including learning how to use the scientific method, understanding how to reach scientific consensus, and distinguishing between scientific and nonscientific explanations of natural phenomena. The article appears in the January 2008 issue of the FASEB Journal (Federation of American Societies for Experimental Biology).

Based on a national survey of 1,000 likely U.S. voters, the study reveals that respondents favor teaching evolution over creationism or intelligent design, and are more interested in hearing about evolution from scientists, science teachers, and clergy than Supreme Court Justices, celebrities, or school board members. “In an age when people have benefited so greatly from science and reason, it is ironic that some still reject the tools that have afforded them the privilege to reject them,” says Gerald Weissmann, MD, Editor-in-Chief of The FASEB Journal. “The bottom line is that the world is round, humans evolved from an extinct species, and Elvis is dead. This survey is a wake-up call for anyone who supports teaching information based on evidence rather than speculation or hope; people want to hear the truth, and they want to hear it from scientists.”