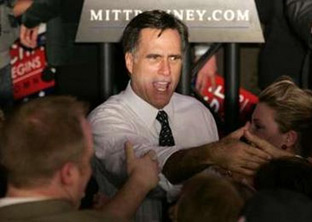 Michigan made Mitt comfortable. First of all, he knew the state (he was born there) and the state knew him (his father was governor from 1963 to 1969). Second, the state has ridden the flagging auto industry to the highest unemployment in the country, and is badly in need of an economic miracle-maker of the type Romney was when he was turning companies around as the head of Bain.

And so, for once, Mitt Romney was the perfect fit. The evangelicals of Iowa could have Mike Huckabee and the independents of New Hampshire could have John McCain. The economically depressed voters of Michigan wanted their favorite son.

Romney did his part. He retooled his campaign, dropping much of the social conservative pabulum that hadn’t been resonating with voters and ran as a businessman hell-bent on delivering results. And the voters responded, according to exit polling. Fifty-five percent of exit poll respondents identified the economy as the most important issue. Those economically minded voters chose the native son by a wide margin: 42% for Romney, 29% for McCain, and 14% for Huckabee. Those who prioritized immigration also went heavily for Romney. Those who prioritized Iraq went heavily for McCain.

Just over 40 percent of voters said that Romney’s personal connection to Michigan was “somewhat important” or “very important” to them. Those voters selected Romney by massive margins.

It helped that the other candidates’ voting blocks weren’t reliable. Independents were just 25 percent of the voters in the Republican primary last night, down from 35 percent in 2000 (when McCain won the state). Romney beat Huckabee badly amongst exit poll respondents who said they attend church “occasionally” and even edged him out amongst respondents who answered “weekly.” Among self-identified evangelicals (40 percent of the total Republican vote), Romney beat Huckabee by five percent, a sign that Huckabee’s evangelical support may not be rock solid in upcoming South Carolina.

Where does Romney’s victory leave the Republican field? Nowhere, really. Huckabee, McCain, and Romney can all point to a victory, meaning that there is no frontrunner. No candidate can take real momentum into the South Carolina primary in four days, meaning that contest will likely be another close one. Conventional wisdom suggests that’s good news for Rudy Giuliani—the lack of a frontrunner means that no one will be biting into his leads in the massive February 5th states. His lack of effort in all the early states, it may turn out, won’t hurt him.

But watch out for Romney. Willard Mitt Romney is like a Monet painting: he looks better from far away. He is better in debates and on television, where he looks presidential, than he is in person, where he appears robotic and phony. Combine that fact with his treasure trove of campaign funds and you’ve got a candidate custom-built for February 5th’s nationwide field. And besides, as long as Romney can stick around and not make any mistakes, he might just end up being the default choice in a field of bad candidates.