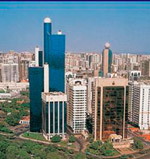 Which is more bizarre? Prince Charles’ hologram walking and twiddling his way across a stage, or a proposal for a no-waste, carbon-neutral city in a desert where searing temperatures make air conditioning a must?

Both the hologram and the city plan made appearances at the World Future Energy Summit, in Abu Dhabi, which began yesterday and runs through tomorrow. It might seem strange to discuss energy efficiency and global warming in a country that sells oil for a living, but 2,500 delegates from around the world are doing just that. Some tidbits from the summit thus far:
-Prince Charles, OB Wan Kenobi-style, called for immediate climate change action.
-Abu Dhabi, partnering with MIT, will build an alternative energy university.
-A British architect announced an elaborate plan for a car-free, zero-emissions city for 50,000 to be powered by solar panels.
-Abu Dhabi will spend $15 billion on a green energy initiative and will build the world’s largest hydrogen power plant.

Now, if only Las Vegas would follow in the footsteps of Abu Dhabi, that’d be something to hologram about.