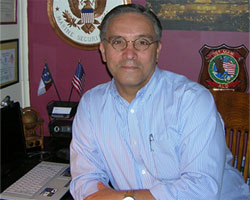 Marshall Adame is a Democrat running for Congress in North Carolina’s 3rd District, a jurisdiction along the Tar Heel state’s low-lying eastern coast that is home to the U.S. Marine Corps’ Camp Lejeune, Air Station Cherry Point, and Seymour Johnson Air Force Base, as well as Blackwater Worldwide’s 7,000-acre corporate headquarters and training facility. Adame is an underdog in the congressional race, where he will likely face seven-term Republican incumbent Walter B. Jones—who brought the term “freedom fries” to Congress—in the general election. Jones has since become an opponent of the Iraq war, atoning for his vote to authorize the war by writing letters of condolence to the families of dead soldiers—a “mea culpa to my Lord,” he says. But the incumbent and his Republican party are not the only obstacles Adame will have to overcome if he hopes to take over the 3rd District’s congressional seat. He also faces tough opposition from Blackwater.

Despite running as a Democrat in a strongly Republican district, Adame has the sort of military past that is appreciated in these parts. “I am a retired United States Marine,” he tells me. “I’m a Vietnam veteran. I spent nine months in Kuwait right after we kicked Saddam out, helping to rebuild the Kuwaiti air force. I spent four years in Egypt with Kaman Aerospace”—a military contractor—”as their logistics leader in that country.” More recently, he spent three years in Iraq working on reconstruction projects, ultimately rising to a senior position with the State Department’s National Coordination Team in Baghdad, where he oversaw the work of roughly ten Provincial Reconstruction Teams. Two of his sons have served in the U.S. Army in Iraq—one was seriously wounded in an IED attack and is still undergoing reconstructive surgeries; the other is currently on his second 15-month tour, stationed in Tikrit. Now back in North Carolina, Adame has even opened his home to a family of Iraqi refugees.

Yet Adame’s recent public criticism of the private security industry’s role in Iraq has caused him to become the target of a political attack from Blackwater. It all began in mid-January when Adame participated in a live question-and-answer forum on a North Carolina progressive blog called BlueNC. “People were writing in, and I was answering the questions,” he says. “It just so happened that the first one was about Blackwater.” He didn’t mince words. “There is no place in the American force structure, or in American culture for mercenaries,” he wrote on the blog. “They are guns for hire; No more, no less… Private Armies represent the very things we despise as a people. Servants to the highest bidder with true allegiance to no-one.”

Numerous Democratic candidates, including presidential contenders Barack Obama and North Carolina’s own John Edwards, have assailed Blackwater, an easy target this election cycle. But Adame claims to speak from personal experience. As a State Department official in Iraq, he was protected by Blackwater, which, he says, used excessive force on at least two occasions while he was in their care. “I saw them shoot people,” he says. “I saw them crash into cars while I was their passenger…. There was absolutely no reason, no provocation whatsoever.” Once, while en route to the Iraqi Ministry of Interior, Adame says he heard gunfire coming from the turret gunner in his own vehicle. He looked out the window of the humvee and “saw people ducking and falling…. The vehicle in front of us rammed into a car that was trying to get out of the way, and they just spun that guy around. He was out cold in that car, maybe even dead. I don’t know, but we just kept on going.”

Adame’s comments about the company have enraged Blackwater employees, including executive vice president Bill Mathews. In an internal corporate email, Mathews encouraged his colleagues to barrage Adame with mail (“he was too cowardly to put a phone number on the web,” Mathews noted in the message). “[H]e wants this company and all of us to cease to exist,” Mathews wrote in the email, which was obtained by the Raleigh News & Observer and posted to the newspaper’s web site. “Do you like your jobs? Are you sick and tired of the slanderous bullshit going on in DC? If so, would you all mind joining me in reminding Mr. Adame that he is running for office in our backyard…. Let’s run this goof out of Dodge…!”

Since then, Adame has been on the receiving end of “some pretty rough stuff,” he says. “I received all kinds of hate mail from Blackwater people. They use a lot of vulgarity. They tell me how Blackwater is defending America’s rights, and that we’re free because Blackwater is fighting for us. Give me a break! That is so erroneous and misleading. It’s just totally dishonest, but those people really believe it. Blackwater is a large organization, and they have a great way of propagandizing their product.”

For its part, Blackwater is unrepentant for the harsh words Adame has received from its employees. “Mr. Mathews regrets that he wrote an inappropriate email in haste,” says Blackwater spokeswoman Anne Tyrrell in a statement. “He does not regret for one moment his desire to defend the brave people who risk their lives every day working for Blackwater.” Tyrrell says Adame “used inaccuracies to unfairly criticize the company” and notes that “one thing that should be taken away from Mr. Matthew’s email is that our people are incredibly proud of and passionate about the work we do in support of the U.S. government.”

Adame, who plans to hold a campaign event near Blackwater’s Moyock headquarters next month, is quick to point out that he has received no threats of physical harm from Blackwater, and despite some obscene emails, has engaged in constructive conversations with some of its employees. “These people don’t want to lose their jobs, and I understand that,” he says. Indeed, looming larger than the issue of military contracting in his district is concern over domestic priorities like health care and jobs. Still, Adame’s recent confrontation with Blackwater seems to have focused his attention on the company. “I feel very strongly about how extensively organized Blackwater has become,” he explains. “And I will do everything I can as a congressman to look into that, to find out whether or not the things they’re doing are even legal.”

It’s an open question what this particular campaign promise might do to Adame’s chances.