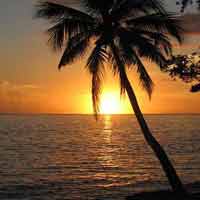 Okay, call me a wimp, but lately temperatures in San Francisco have struggled to get above 45 degrees, and even for a guy who grew up suffering through Nebraska winters, it feels pretty damn cold. Maybe it’s the poorly-insulated apartment heated with a space heater? Anyway, with wind chills currently freezing the tootsies off of most of America, it seems like we could use some music that reminds us of sunnier times. So put on your shades and join me in some creative visualization in pursuit of warmth.

Of course, music made in countries where wind chill isn’t really an issue (and tracks that have the word “sun” in the title) might be a good first step. Jamaica’s always pretty nice (when it isn’t getting battered by hurricanes), and while anything by Bob Marley would qualify here, the slightly-less-well known “Sun is Shining” brightens up even the most gray day, both in its original and bouncy Funkstar Deluxe remix versions:

Then there are tunes that take you back to high school summer break memories, driving in your crappy car with the windows open and the stereo all the way up, a Big Gulp wedged between the seats (this was before cup holders!) and a worn-out cassette providing a soundtrack to the green vistas. Two summer hits with a sweaty energy that immediately get your blood pumping: Bruce Springsteen’s “Born to Run” and Veruca Salt’s “Seether.”

I guess Los Angeles sometimes qualifies as a hot-weather location too, and I don’t think there’s any warmer West Coast hip-hop tracks than “California Love” and “Gin and Juice.” The former’s funky Frampton vocal and the latter’s laid-back beat immediately bring to mind humid, sultry nights.

A post on summery music wouldn’t be complete without some cheesy dance pop, and for that, the first place to turn is the island of Ibiza, where the non-stop hedonistic summer club scene often spawns worldwide hits in the fall as worn-out ravers head back to their jobs. First, Energy 52’s epic 1997 hit “Café del Mar” is actually named after an Ibiza hotspot, although its terrible video features people wearing heavy coats; Modjo’s “Lady (Hear Me Tonight)” is a carefree neo-disco number whose video (featuring teenage summer hijinks) actually fits with our theme.

Okay, commenters, go crazy: music that reminds you of a time when you didn’t need to bundle up just to go get your morning coffee? Tunes that once rocked your summer barbecues? Or tracks that just say “summer” in the title? Let’s have ’em.