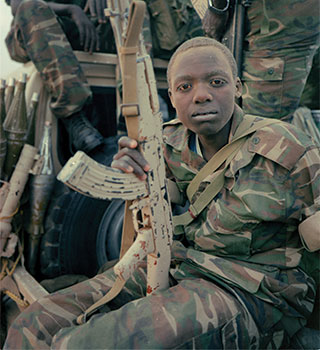 My first glimpse into the flow of small arms into Darfur began at 4:45 on a February morning in 2006. The lights were off in the first-class Sudan Airways lounge at Khartoum International Airport. Sitting to my left was Abdallah, resplendent in white robes, sporting spectacles and a sharply trimmed goatee. Back then, Abdallah’s younger brother, Mahamat Nour, was the leader of an 8,000-man rebel force sworn to overthrow the government of Chad. The Sudanese government, which has a long record of meddling in Chad’s affairs, supported Nour’s group, the United Front for Democracy and Change (its French initials are fucd), and had been providing it with refuge in Darfur. A Sudanese contact I’ll call “G” had arranged for me to accompany Abdallah to Darfur to visit his brother’s headquarters. My chin dropped rhythmically to my chest, then cocked up again. I rubbed my eyes. G leaned over and whispered in my ear that Abdallah had just returned from China. I sat bolt upright.

A week earlier, a friend who had visited the Chadian rebel camps in Darfur said she’d seen munitions boxes with Chinese characters on them—a new clue as to how weapons from around the world slip into the region. That China was backing the Chadian insurgents wasn’t surprising: At the time, Chad recognized Taiwan, much to the anger of Beijing, which had its eyes on the impoverished nation’s oil fields. Meanwhile, China had invested nearly $6 billion in Sudan. (Last year, it purchased about two-thirds of Sudan’s oil.) It also wields veto power over any possible United Nations Security Council resolutions against the genocide in Darfur.

G left the room. Abdallah spoke no English and my French and Arabic don’t get me much beyond small talk. “Abdallah,” I asked, “how was China?” He played dumb. But I persisted, and eventually he relented. “China was good,” he said. “It was a personal trip—medical reasons. Chinese doctors are very good, but the Chinese are racist—some run and hide when they see me on the street.”

A few hours later, a small Sudan Airways jet flew us more than 500 miles to the border town of El Geneina in western Darfur. As I stepped onto the dirt runway and into the blinding light, two plainclothes police officers demanded to see my papers. One of Abdallah’s travel companions shot them a sideways look and muttered something I couldn’t hear. We proceeded on our way.

About 20 miles from Chad, dusty El Geneina was abuzz with African peacekeepers, Western aid workers, Chinese contractors, Chadian rebels, and Darfuri refugees. The rebels picked me up early the next morning in a beige Toyota Land Cruiser—the same kind used by Sudan’s feared security services. After half an hour of bumping through the desert, we rendezvoused with four other Land Cruisers, each equipped with sacks of rocket-propelled grenades and heavy machine guns. I saw that Abdallah had exchanged his white robes for a clean, crisp military uniform.

We sped off again, careening along the Chad-Sudan border. I was sandwiched between a hulking driver and a young commander named Ibrahim, who played me video clips from Iranian arms companies on his new Nokia N70. Images of missiles, spy satellites, and drone aircraft flashed across the screen as Knight Rider-style theme music played.

On the truck’s dashboard were two plastic water bottles; six cassette tapes of Sudanese pop and religious music; two packets of stale cookies; a handful of toffees; three magazines of ammunition; a Beretta pistol; and a Glock pistol.

The Glock caught my eye. During my three trips to Darfur and time spent with other armed groups in the Middle East and Africa, I had never seen such a spotless, unworn weapon. I picked it up, considered its cold, clean lines, turned the black metal and plastic over in my sweaty hands, racked its slide, and set it down. I memorized and then scribbled down its serial number: HAP850. I didn’t risk photographing it; Ibrahim was eyeing me suspiciously.

I saw the gun again the following day as I sat in the inner sanctum of the rebel leadership, lounging on a faux Arabian carpet in a mango grove. Various commanders passed the Glock around. From what I could discern it was a gift to Nour. I had already elicited his fury by asking uncomfortable questions about his past (he said he was a freelance oil consultant), the Darfur genocide (“a tribal matter”), and where his weapons came from (“friends”). Asking him about the Glock was a chance I did not dare take.

I spent three days in the camp, surreptitiously photographing and copying the serial numbers off of rifles, rpgs, and heavier artillery. Upon returning to Khartoum, I asked G how much it costs to supply a small rebel army: “A million dollars?” He laughed. “Less! Much, much less.”

I sent my photos and serial numbers to arms experts in Europe. The Beretta was traced to Iraq; the Glock was traced to a factory in Austria. The rest were traced to factories in China, including a grenade launcher that went into production in 2003, as the killing in Darfur flared. The UN forbids arms shipments to Darfur; however, there is no prohibition on selling weapons to the Sudanese government.

There is also an EU ban on European companies such as Glock exporting arms to Darfur. Just before I left Sudan, a representative from Amnesty International’s Austrian branch requested to use the information I’d collected about the Glock. In March 2006, Amnesty issued an open letter to Austria’s Parliament demanding an explanation of how the pistol ended up in Darfur.

It was not the first time Glock had been linked to shady arms deals. In the ’90s, it bought high-capacity clips from U.S. police departments and resold them to civilians seeking to evade the assault-weapons ban. But with $100 million in annual sales and powerful allies, the firm has usually emerged unscathed.

Glock sued Amnesty, claiming that it was falsely accused of violating the UN arms embargo. As the case went to trial, the company was forced to reveal that it had sold the pistol to a Kuwaiti company along with 104 other handguns under an export permit from the Austrian government. However, Amnesty learned that the Kuwaiti firm also maintained a branch in Khartoum, and a Glock lawyer produced a document that said the weapon had been taken on a hunting trip to Sudan. Glock quickly denied that the pistol was ever in Africa and later claimed that it was in fact back in Austria, stored inside a company safe.

Months later, in March 2007, I saw a photo of Mahamat Nour online. He was smiling and standing with his erstwhile enemy, Chadian president Idriss Deby. Nour had traded his rebellion for a peace deal; he later received the top job in Chad’s defense ministry. Not long afterward, Chad cut its ties with Taipei, and Chinese companies were invited to explore its oil fields. (In December, Nour was fired as the peace deal unraveled. He is rumored to be back on the Chad-Sudan border.)

Despite losing its lawsuit last May and an appeal in January, Glock is still seeking damages. Meanwhile, Amnesty reports that the gun maker plans to set up facilities in Brazil, safely beyond the reach of European export rules.

*Correction appended: An earlier version of this story erroneously referred to the cocking of a Glock pistol. We have corrected the error.