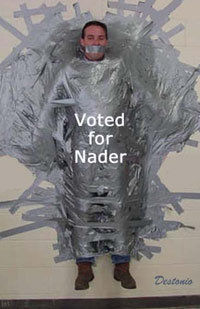 Okay, so Ralph Nader has entered the presidential race and all of progressive America is having horrible flashbacks.

All of the criticisms of his 2004 run still hold, and even the left-wing blogosphere is completely against the idea. It’s a narcissistic and, at this point, almost embarrassing endeavor that has only the chance to do harm to the progressive values and ideals Nader holds dear.

But let me suggest a stay of the beating of chests and tearing of garments. The Nader magic had diminished significantly by 2004, and is diminished further today. He is no longer the Green Party’s chosen candidate, and his argument that the two parties are essentially identical doesn’t hold water when one party is running a woman and an African-American. Any call for change that Nader makes this year will be a hollow echo of the calls the Democratic candidates are already making.

Besides, no candidate who took 0.38 percent of the vote in 2004, when the Democratic candidate was dramatically worse than the options available today, is going to see a resurgence in November 2008.

So fret not, citizens of Berkeley, Burlington, and Madison. You’ve made your mistakes with Nader in the past but America can forgive you. Particularly if you ignore him this time around.