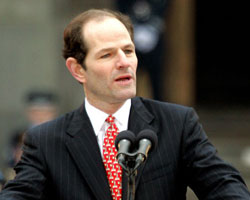 Having sex with prostitutes is always a risky proposition for any public official. But when you’ve pissed off some of the richest and most powerful people in the world, paying for sex may be one of the more stupid things you could do. Jezus, Eliot, what the hell were you thinking?

In case you haven’t heard yet, The New York Times reported this afternoon that New York’s Governor Eliot Spitzer was caught on a federal wiretap arranging to meet a high-priced prostitute at a Washington hotel last month. In a press conference that lasted nanoseconds—there were no questions taken—Spitzer admitted that he had violated “his obligation to his family,” but he said nothing else about the news report and gave no hints on whether he intends to remain (that is, try to remain) in office.

Spitzer is so loathed on Wall Street and in the business community that the U.S. Chamber of Commerce has devoted entire conferences to figuring out how to bring him down. Tom Donohue, the president of the Chamber, once accused Spitzer of using the “most egregious and unacceptable form of intimidation that we have seen in this country in modern time” in his investigation of Wall Street firms back in 2005, when Spitzer was the state’s attorney general.

Business leaders despise Spitzer for his holier-than-thou press conferences in which he denounced them as slimeballs. Among his enemies: former chief of the New York Stock Exchange, Dick Grasso; the entire mutual fund industry; dirty power-plant owners; trillion-dollar banks. Spitzer went after all of them, with an aggressive use of state and some federal law that was derisively known as “Spitzerism.” His election as New York’s governor showed that he had the ability to win over upstate Republicans, a sign that he might have a future in national politics. And imagine the business world’s horror at the possibility of a Spitzer-led U.S. Department of Justice, or worse, the Securities and Exchange Commission.

Spitzer had to know that people were gunning for him. Put aside Wall Street, he’d made plenty of enemies prosecuting garden-variety criminals. As head of the state’s organized crime task force, he prosecuted two major prostitution rings. He certainly must have realized that prostitution business often has deep ties to mobsters. So by associating with $5,500-an-hour “executive” call-girls who were in bed with wealthy individuals and possibly connected to organized crime, Spitzer put himself in a position where he could be blackmailed or ruined by the very types of people he had pursued.

Sex for hire might not be the end of every politician. Louisiana senator David Vitter, whose phone number turned up in the records of the famous D.C. Madam, is testament to that. Other politicians have survived sex scandals, too, most notably Rudy Giuliani and Idaho senator Larry Craig. But Spitzer made his career on being Mr. Clean. He used his moral authority to fix a lot of things that were wrong with corporate America. As a result, this hypocrisy will be his undoing. Dick Grasso and his friends must be popping the champagne.