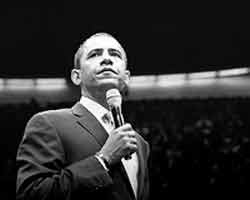 Thenjiwe Tameika McHarris, a 22-year-old political science and Africana studies student at Rutgers, is torn, in more ways than one. Although intrigued by the remarkable success of Barack Obama, she warns her peers, “We must act very critically. If you are honest, and compare his politics to others, you just might question how progressive he truly is.”

Thenjiwe’s identical twin sister and closest friend, however, is working at cross-purposes. She’s vigorously encouraging young voters to vote for Obama while actively coordinating support rallies on his behalf.

I feel their pain.

In many ways, I am Barack Obama. I’m a fortysomething black man who attended prep school, an ivy-league university, and graduate school. I have a wife who is not to be messed with and two young children. I’ve been the “first black president” of a couple of groups and organizations and have worked as a community organizer.

Which is why I am similarly experiencing my own internal civil war over Barack’s candidacy. On one side of my brain stands Barack Obama, the inspirational movement builder, the decent human being, the righteous black icon. On the other side is a less compelling candidate—Obama the centrist, the rhetorician, the ideologically elusive.

This contest for my political imagination is not about whether I vote for or against Obama, much less any other presidential contender. It’s about what level of importance policy positions and concrete ideas should hold in elections. No one else in the Democratic and Republican primaries has made such a direct appeal to our emotions and other things intangible as Barack Obama. The positions on which Barack is staking his candidacy—”unity,” “change we can believe in,” “audacity of hope,” and “yes we can”—don’t show up on any public-policy score cards.

Much has been made of Barack’s considerable charisma and the cult of personality that has grown around his candidacy. Both John McCain and Hillary Clinton, watching helplessly as audiences swoon for Obama, have tried, without much success, to undercut his affect on voters by painting him as a candidate without substance. But when I, as a journalist, interviewed him during his U.S. Senate campaign tour throughout rural and exurban Illinois in 2004, I wasn’t awestruck. Rather, I identified with him. As I sat in the back of his campaign car plying him with questions, I couldn’t help thinking that he could have easily been one of my friends. In fact, one of the biggest compliments I can give Barack is that as impressive as he is, he’s not wholly distinguishable from the many poised, socially dexterous, and eloquent black women and men with whom I’ve gone to school.

But what was perhaps most personally intriguing about Obama was that his unhesitant foray into electoral politics represented the road I had forsworn years ago. Once upon a time I believed, as a community activist, that I could become a social-change agent of the highest order by becoming an elected official. Such was my chosen destiny until working in the sausage factory of electoral and campaign politics turned my stomach and made me seriously rethink that path.

While interviewing Obama I realized here was a man who was not unlike me but who had been walking through the ugly meat grinder of national politics and had emerged apparently uncynical and with his humanity intact. For every post-civil-rights child who was promised she or he could become the first black president, but hasn’t been willing to endure the personal and even spiritual deformity the political process subjects people to, Barack has been a revelation.

Clearly, Barack has struck a chord, not just with black voters, but with a broad range of people. I talk to Obama supporters all the time who know precious little about Barack’s policy positions and don’t seem all that worried about them, because they feel what he represents transcends politics.

The problem is, I care deeply about the primacy of issues and transformative policies, and think others should too. And when I hear about young voters and college students whose political activism was inspired by Barack’s candidacy, I’m transported back to my junior year in college, when I cochaired the Jesse Jackson for President Campaign on campus.

Jesse also came to me as a revelation, but in a much different way. Jesse’s vision of change in 1984 was specific, textured, and if not revolutionary, had—at least in mainstream political terms—radical elements to it. Like Obama, Jesse was more than a black political figure. He seemed to be more along the lines of a universal freedom fighter. He explicitly identified with the struggle for political self-determination and expression in Cuba, the Arab Middle East, Latin America, and Africa.

Of course Jesse lost, but his crusade still had the effect of inspiring me to put faith in the American political system. Despite pundits who look back 20 years and write him off as a one-dimensional presidential candidate and race man, Jesse had considerable white appeal and support. In 1984 he won five primaries and caucuses, and in 1988 he won eleven, including non-Southern states like Delaware, Michigan, and Vermont. His Rainbow Coalition, although trivialized today, sought to include not just white progressives, people of color, and young, disaffected voters, but also the poor, the LGBT community, family farmers, and labor. People of color and low-income communities where not just along for ride, but were eloquently described by Jackson as co-leaders and stakeholders in a new political force and social movement.

There would be no Barack without Jesse, yet they are miles apart in what they, as candidates, have regarded as real social change. But we also know Barack is finely calibrated to the reality of 21st-century national politics. In cutting a swath down Middle America, Barack’s identification with marginalized communities goes much more unspoken as he instead allows the obviousness of his race, African pedigree, and non-Western name suggest his possible sympathies. When he stirringly chants “yes we can,” it’s the political equivalent of a well-worded fortune cookie, allowing anyone the freedom to interpret his message in her own personal way.

This is a smart political strategy and is particularly comforting to those who are easily scared off by race-based and ethnic-based appeals. In an era of endlessly subdividing identity politics, Barack’s message can appear refreshingly universal. But when Barack or any national candidate fails, for the sake of political expediency, to openly acknowledge constituencies looking to emerge from the shadows—LGBT voters, Asian and Arab Americans, the working poor—the interests of those voters are once again set back and forgotten until the next election cycle.

Despite attempts by Republicans to paint Barack as America’s most liberal senator, there is little for voters who identify as “progressive” to hold on to. Except for his stance on the war, which is not insignificant, Barack is largely indistinguishable from Clinton or any other moderate to liberal Democrat. He is averse to risk, downright squishy on issues like gay-rights issues, and when I clicked on GlassBooth.org a couple of months ago, the online questionnaire that claims to help you find presidential candidates who match your views, several candidates scored higher than Barack.

And on the question of a federal response to subprime lending abuses and foreclosure, an issue I’ve been passionate about since my days running a financial cooperative in Bedford-Stuyvesant, I’m convinced that extensive regulation and government intervention is the only way to curb predatory lending and prevent massive foreclosures. Obama, on the other hand, relies far more on the market correcting itself. Max Fraser recently wrote in The Nation that “As he has done on domestic issues like healthcare, job creation and energy policy, Obama is staking out a position to the right of not only populist Edwards but Clinton as well.”

Personality at What Price?

George Bush is a dramatic reminder that the ideas, actions, and policy positions of a president make a huge difference in our private and public lives. Considering that Bush hawked the “ownership society” while simultaneously presiding over one of the most devastating periods of homeownership loss and middle class wealth depletion this country has ever seen, I long for a president who can usher in an era of regulatory action and corporate accountability. I don’t believe any presidential contender is up to that task.

McCain and Obama are both trying to prove they can rise above partisan labels and will undoubtedly swim even more toward the political mainstream. If one of them wins the presidency, this might deliver a change in the process of presidential governing and leadership, but we can’t expect transformative policies, whether it be the kind that were once proposed from the left by Jesse Jackson or those enacted from the right by Ronald Reagan.

But if you believe the mainstream press and Barack’s campaign narrative, issues are secondary to this election, and anything resembling hardened ideology is a political liability. For example, our country is not just looking for an exit strategy out of Iraq, but for someone who can restore our faith in public service and unify the country with discernible amounts of integrity and nonpartisanship.

Maybe, but I perceive the Obama movement that is gathering momentum across the country in simpler terms. His optimism, energy, and smoothing over of national identity divisions provides idealists and cynics alike with a vision of America and national politics that is scrubbed of ugliness and filled with possibilities. And of all the stuffed suits that have paraded down the campaign runway, Obama’s is the only one that appears to be filled with real flesh and blood.

Despite Obama’s gifts, other candidates—John McCain, Hillary Clinton, Ron Paul, and even Green Party candidate Cynthia McKinney—have also claimed intangible connections with voters. Nevertheless, I remain stubbornly wedded to the belief that issues matter more than anything else. In the meantime, however, Obama has left his mark on me. For the first time in 15 years, I’m considering running for public office.