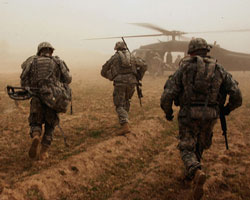 This week, as anti-war activists descended on Washington to mark the 5th anniversary of the invasion of Iraq, key members of the peace movement gathered at Take Back America, the annual progressive convention, to discuss their next moves in their ongoing mission to end the war. Up until now, the peace movement has relied on fiery rhetoric and tactics, including large-scale protests and congressional pressure campaigns, that have so far failed to produce the desired results. In part, this may be because the peace movement has always known when it wants to get out of Iraq (“Now!”), but not how it intends to do so.

Speaking at a Take Back America panel on Monday, Leslie Cagan, co-chair of United for Peace and Justice, stressed the need to “mount serious opposition” to Congress’ next authorization of funding for the war. “Constant public protest activities,” Cagan said, are needed to build pressure on the new president and Congress. She also said that continued counter-recruiting efforts are needed to curb the military’s ability to wage war.

But these time-worn protest strategies haven’t worked. Congress has never seriously considered denying any of the president’s many war funding requests, and troops levels in Iraq today are near their highest point.

Nita Chaudhury of MoveOn.org said that the peace movement needs make it clear to Republicans that voting to continue the war won’t just imperil their jobs, but send their political movement into a “death spiral” that would “doom it for a decade.” Evidence of the death spiral’s imminence is hard to find: The economy is outpacing the war as the most important issue in every primary, and the vehemently pro-war John McCain is polling evenly with Democrats in the presidential race.

Tom Swan, the national coordinator of the Iraq/Recession Campaign, explained that his coalition will try to convince the public that the war is causing America’s economic ills. What Swan was missing was persuasive data showing that the link between the war and the recession was real, and not just an opportunistic PR tactic by the peace movement. Swan is supported by a Nobel-winning economist, but serious questions remain.

In all, five anti-war leaders spoke during the Take Back America panel discussion and not one of them devoted more than a half-sentence to the surge, which any reality-based observer would admit seriously complicates the anti-war movement’s efforts to generate popular opposition to the war. And none made any mention of how America ought to withdraw.

But then Darcy Burner spoke.

A former Microsoft middle manager who is taking her second run at Congress in Washington State, Burner said that she was fed up with telling voters she wanted to end the war, only to be stymied by the question of how she planned to do so. So she met with Paul Eaton, the retired army general responsible for training the Iraqi military between 2003 and 2004, and developed a comprehensive withdrawal plan.

On the key issue of removing troops, Burner’s 30-page plan, dubbed “A Responsible Plan to End the War in Iraq,” glosses over the details. It notes that “troop draw-downs should begin immediately and continue until no more troops remain in Iraq,” but the timeframe for the withdrawal and the path(s) out of the country aren’t described. Eventually, they will be “based on planning provided by our military leadership.”

But the plan is comprehensive in every other respect. Using a combination of Iraq Study Group recommendations and legislation already before Congress, the plan provides for refugee assistance and a diplomatic surge that would bring together regional leaders and aims to initiate political reconciliation within the country. It would create non-military Provincial Reconstruction Teams that would “strengthen the capacity of towns and villages to resist the insurgency” and would reach the “entirety of the Iraqi population.” It calls for the departments of State, Agriculture, Commerce, Transportation, Justice, and the Treasury to work with international groups to rebuild the country. In short, it de-militarizes the occupation.

The plan also aims to restore habeas corpus to detainees, make extraordinary rendition illegal, and phase out the use of private military contractors. (It can be read in full here.)

It is far from a perfect plan, and it would likely get seriously reworked if it were introduced in Congress, no matter how large the Democratic majority. But it recognizes the anti-war movement’s need to add depth to its rhetoric. For that, Darcy Burner has done folks like Cagan, Chaudhury, and Swan a great service.

Photo of soldiers in Iraq by flickr user soldiersmediacenter used under a Creative Commons license.