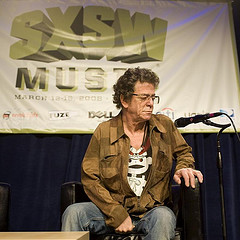 Lou Reed reminds me a little bit of my grandmother. He’s old, he’s got bad posture and a New York accent, and he’s a little pessimistic. But if you stick around long enough, he’ll offer up some keen insight and make you laugh.

The rock singer-songwriter/guitarist, during a SXSW keynote speech at Austin’s convention center Thursday, told a packed house that his favorite movie is The Bourne Ultimatum. Why? Because of the fight scenes.

Aggression seems to be a recurring theme for Reed. “Punk is aggressive, steel, street, action. All that young guy stuff,” he said. “Where else is it gonna go? It’s [music] or jail.” He later became more self-reflective about his attitude and his music, adding, “I have a B.A. in dope. And a PhD in soul.”

A few things to know about Reed, if you don’t already. At one point or another, he was a copy reader for a divorce lawyer, a package wrapper at Doubleday, and a mover. After studying film and acting, he decided music was his thing. “I basically started writing monologues with music. It was such a simple idea, I don’t know if it even constitutes being an idea.” He makes self-deprecating comments like this a lot.

Lastly, and most importantly, Reed openly disses the mp3 format of distributing, exchanging, and selling music. “Technology is making it easy to make things worse,” he sighed. “Look at the way YouTube looks. It’s like, hey, here’s a movie the size of a stamp. And here’s music reduced to a pin drop; reduced to a crazy zoo animal.” In case you’re confused, he’s pissed at how mp3s reduce the size of music files to easily manageable, but crappy sounding, songs.

In short, Reed’s kind of a badass that doesn’t seem to care much what people—specifically record executives—think about him or his music. He’s more interested in writing a “musical monologue” than a follow-up to his (arguably) biggest commercial hit, “Walk on the Wild Side.”

Is he grumpy? Yeah, a little. But he’s also pretty honest, and frequently whips out great little doozies like this one: “I’ve never understood how songs get written. If I did, I’d have a ‘Son of the Wild Side’ and an island in the Caribbean.”