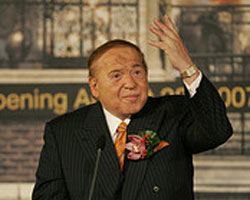 Brad Blakeman, the president of the hawkish, pro-surge advocacy group Freedom’s Watch, has resigned amid infighting among the group’s leadership. “Sources close to the conservative nonprofit say that [Blakeman] drew fire for focusing too much on administrative tasks and neglecting major projects since the group sponsored a $15 million television ad campaign in 2007 to promote the Iraq war surge,” reports National Journal‘s Peter Stone, who wrote a profile of Freedom’s Watch backer, casino mogul, Sheldon Adelson, for Mother Jones‘ January/February issue. “Freedom’s Watch reportedly plans to spend as much as $200 million on pro-Republican TV ads on national security and domestic issues this year.”

Adelson has also provided $2 million to back a TV/ radio campaign by a lobby group, Defense of Democracies, to go after House Democrats who don’t support the White House’s preferred domestic surveillance legislation, Stone reports. The Republican bill would provide retroactive immunity to telecommunications companies being sued for billions of dollars by consumers who charge the companies illegally provided the government access to their private communications data. Defense of Democracies was recently set up as a 501(c)4 group by the Foundation for the Defense of Democracies, which has received State Department funding. The ads targeting Democrats prompted Democratic members of the advisory board of the previously ostensibly bipartisan Foundation for the Defense of Democracies to resign en masse earlier this month, charging FDD had basically set up an openly partisan front group.