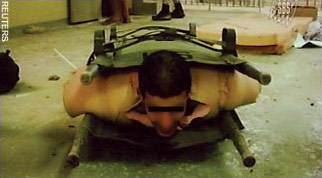 I don’t quite understand how the media let out a collective yawn when it heard the news that top Bush Administration officials (Cheney, Rice, Rumsfeld, Powell, Ashcroft, Tenet) personally signed off on “enhanced interrogation techniques” that included pushing, slapping, sleep deprivation, waterboarding, and other tactics. Waterboarding is torture, remember?

I’m further confused by the fact that the media remained passive after President Bush admitted that he knew and approved of what his principals were doing. This should have been huge news — the tactics the Administration’s top officials approved probably violated the Geneva Conventions, after all — and yet this was less important than “Dog Finds Way to Owner’s Funeral”?

Maybe the media’s justification is that the Administration has a built-in excuse — it will simply say that the “enhanced interrogation techniques” it approved don’t constitute torture. Last year, for example, former CIA Chief Tenet told ABC News, “It was legal, according to the Attorney General of the United States.” That argument only highlights how perversely the Bush Administration worked the system — it rewrote the rules in the middle of the game to justify its every move. (It’s worth pointing out that even the tactics that we know of now, and more may be exposed in the future, are pretty awful.)

Maybe the fact that the ACLU is calling for an independent counsel will stir the slumbering opinion-makers. From the org’s press release:

The American Civil Liberties Union is calling on Congress to demand an independent prosecutor to investigate possible violations by the Bush administration of laws including the War Crimes Act, the federal Anti-Torture Act, and federal assault laws.

“No one in the executive branch of government can be trusted to fairly investigate or prosecute any crimes since the head of every relevant department, along with the president and vice president, either knew or participated in the planning and approval of illegal acts,” said Caroline Fredrickson, Director of the ACLU Washington Legislative Office. “Congress cannot look the other way; it must demand an independent investigation and independent prosecutor.”

If I had to bet, however, I’d say that the media (and probably America) has a case of outrage fatigue so acute that no development in this story is going to make a difference. We’ve been beaten, America. We didn’t have the endurance to keep up with this gang.