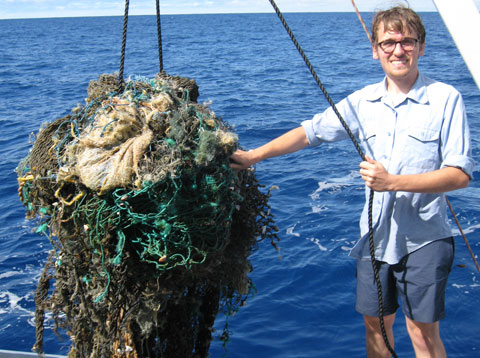 As Mother Jones reported last October, bisphenol A, a chemical used in the production of plastics, is under serious scrutiny for mimicking the role of estrogen. And last Monday, the government’s National Toxicology Program released a damning draft brief on the potential endocrine disruptor. As a result, last week saw a number of new companies distance themselves from BPA; most notably the iconic water bottle manufacturer Nalgene will pull bottles made with the chemical. By the end of the week, Canada announced a “precautionary and prudent” ban on the sale of baby bottles with BPA.

One of the issues at hand is that the U.S. alone produces bisphenol A at a staggering rate of billions of pounds per year—2004 saw 2.3 billion pounds produced—for use in nonbiodegradable polycarbonate plastics and epoxy. So even if a few companies, or even a few countries, ban the substance, we still have to deal with an absurd amount of lingering, toxic particles. And since BPA doesn’t biodegrade, where does it all go?

Vice Broadcasting Service (VBS)—the broadcasting arm of the bohemian magazine known for publishing provocative articles like “The Vice Guide to Shagging Muslims”—gives an entertaining, albeit disheartening answer. As part of their Toxic series, VBS sent host Thomas Morton on a three week voyage to uncover what happens to our discarded plastic goods and the chemicals they’re made with. The result is a refreshingly serious diary, though still loaded with enough cynical wit to capture the attention of our spastic youth.

In “Garbage Island,” Morton and his team join forces with ocean advocate and seadog Capt. Charles Moore on a quest to discover a mythical floating island of waste, the home of discarded plastics, described as twice the size of Texas. Moore, who has made numerous trips in pursuit of trash “accumulation zones,” is a die-hard environmentalist.

The entire 12 episodes are interesting and worthwhile, at times sad and funny, but I found the most impact comes as the crew begins to internalize the true, troubling significance of our wasteful convenience culture. As everything from planter boxes to helmets float alongside their vessel, Moore explains how plastic toxins, like bisphenol A, first accumulate in jellyfish and then work their way up the food chain into our bodies. So even as companies earn public praise for pulling BPA products from the shelves, the animal kingdom, including us, still faces years and years of toxin-induced disease.