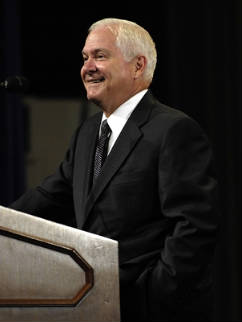 The U.S Air Force was created to drop bombs and lots of them. It’s a task the service has performed with great enthusiasm over the years… and the job has given way to the image of the Tom Cruise-style fighter jock—the smart-talking, glamour-boy pilot who’s a pain in the butt on the ground and your best friend in the air. But just as technological advances have brought into question the usefulness of manned space exploration, the fighter jock is quickly being supplanted by unmanned aerial vehicles (UAVs) that can track and destroy targets without risking the life of a human pilot, all from the comfort of an airbase in Nevada.

Perhaps sensing that its Top Gun image stands to suffer from new technologies, the Air Force has continued to invest heavily in big-ticket, Cold War-era defense systems like the F-22 Stealth Fighter, an amazing machine to be sure, but one that is, shall we say, of limited use in a war against IED-planting insurgents.

Now the Air Force’s continued insistence on expensive, pilot-operated planes is under new scrutiny. In a speech today at the Air Force’s Air University at Maxwell Air Force Base in Alabama, Defense Secretary Robert Gates (himself a former Air Force officer), offered some plain talk on what he expects from the service in the ongoing wars in Iraq and Afghanistan, namely more emphasis on UAVs.

Excerpts from Gates’ speech, as reported by the Associated Press:

In my view we can do and we should do more to meet the needs of men and women fighting in the current conflicts while their outcome may still be in doubt. My concern is that our services are still not moving aggressively in wartime to provide resources needed now on the battlefield…

Regarding the slowness to deploy UAVs to the battlefield:

People were stuck in old ways of doing business, it’s been like pulling teeth… All this may require rethinking long-standing service assumptions and priorities about which missions require certified pilots and which do not. I’m asking you to be part of the solution and part of the future.

Consider the gauntlet thrown down.