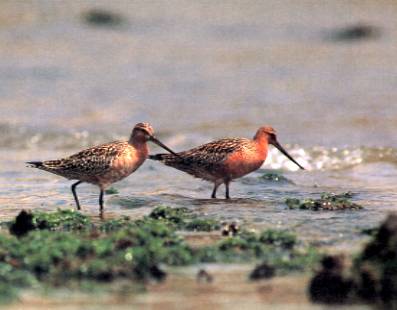 First the good news. Storks, pelicans, ibises, and other rare waterbirds from Cambodia’s famed Tonle Sap region are making a comeback. Some of the waterbird species have rebounded 20-fold since 2001. That’s when the Wildlife Conservation Society partnered with the Ministry of Environment of the Royal Government of Cambodia to employ former hunters and egg poachers as round-the-clock park rangers to monitor the birds. The upshot is that the colonies of Tonle Sap (Great Lake), including the largest, and in some cases, only breeding populations of seven globally threatened large waterbird species in Southeast Asia, have increased from a total of 2,500 breeding pairs in 2001 to 10,000 pairs in 2007.

Now the bad news. An alarming new study reveals that Australia’s shorebirds have suffered a massive collapse in numbers over the past 25 years. A large scale aerial survey study covering the eastern third of the continent by researchers at the University of New South Wales has identified that migratory shorebirds populations there plunged by 73% between 1983 and 2006. In the same timeframe, Australia’s 15 species of resident shorebirds have declined by 81%. The study is published in the scientific journal Biological Conservation.

“This is a truly alarming result: in effect, three-quarters of eastern Australia’s millions of resident and migratory shorebirds have disappeared in just one generation,” says Richard Kingsford, one of the study authors. Of the 10 wetlands supporting the highest number of shorebirds, four had been substantially reduced in size during the survey period. And not only in Australia. “The wetlands and resting places that they rely on for food and recuperation are shrinking virtually all the way along their migration path, from Australia through Indonesia, the Philippines, Malaysia and up through Asia into China and Russia,” says Kingsford.