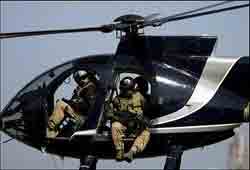 Henry Waxman’s Committee on Oversight and Government Reform, a persistent thorn in the side of private military and security firms, has zeroed in on a new target: the use of foreign tax havens by government contractors operating in Iraq and Afghanistan. The investigation follows recent reports that KBR has used an offshore subsidiary to avoid paying hundreds of millions of dollars in payroll taxes, as well as MoJo’s reporting on Blackwater’s Barbados-based sister company, Greystone, whose local address and telephone number in Bridgetown trace back to a firm that specializes in shielding corporate revenues from U.S. tax authorities.

This week, Waxman’s committee fired off letters to 15 companies, including KBR, Triple Canopy, DynCorp, CACI, Science Applications International Corporation, EOD Technology, and the Prince Group (the holding company that owns Blackwater and Erik Prince’s other business ventures), asking whether these contractors have any “subsidiaries or other affiliated entities that were incorporated in any of the 39 foreign jurisdictions designated as tax havens by the Organization for Economic Cooperation and Development”—and demanding detailed information on their foreign subsidiaries and affiliates if the answer to that question is yes.

Among the information Waxman is seeking:

1. A description of which persons or entities hold ownership interests in the entity;

2. A list of contracts under which the entity provided goods or services to any agency of the United States government between January 1, 2002, and the present, whether directly or indirectly;

3. Copies of contracts, subcontracts, memoranda of understanding, or other agreements between the entity and your company or any of its affiliates;

4. A description of the gross profits the entity earned between January 1, 2002, and the present, through the performance of the contracts responsive to question 2 above, and the percentage of these profits that was allocated to the foreign jurisdiction in which it was incorporated;

5. A description o f the number o f U.S. and foreign nationals paid by the entity between January 1, 2002, and the present, to perform services pursuant to the contracts responsive to question 2 above; the location where the workers performed the work; the categories of jobs these workers performed; the number of U.S. national personnel who worked within each job category; and the average compensation (in U.S. dollars) paid to U.S. national personnel working within each job category;

These customarily secretive companies will likely be reticent to divulge this type of information—and it remains to be seen how forthcoming the targets of Waxman’s investigation will be with committee investigators. Prince, for his part, responded icily when asked how much Blackwater earns in profits during an oversight hearing last October. “We’re a private company, and there’s a key word there—private,” he said. (Prince’s refusal to disclose his company’s profits so infuriated committee member Chris Murphy, a freshman Democrat from Connecticut, that he introduced a bill, which passed the House on Wednesday, requiring companies that derive more than 80 percent of their revenues from government contracts, totaling more than $25 million, to make their profits public.)

Given Prince’s past reluctance to divulge financial information in particular, I asked an oversight source about the level of cooperation the committee expects from the companies it’s investigating. “We expect them to comply,” the source replied confidently. The source also said that it was too soon to tell whether the investigation would lead to a hearing.

If the Prince Group and the other companies that received inquiries from Waxman do indeed provide the committee with the requested information, it will open a window not only on how much profit these firms clear on their government contracts (and how much of those profits have been shielded from U.S. taxes), but on who these companies employ. Increasingly, military contractors have turned to so-called third country nationals—workers who hail from the developing world and earn far less than their American or European counterparts—to staff their contracts. In Blackwater’s case, it has subcontracted with its Prince Group affiliate, Greystone, to provide third world recruits to work static security gigs, guarding a variety of military installations in Iraq. (These foreign personnel, in turn, are typically contracted to Greystone through third party companies, among them Bogota-based ID Systems.)

Greystone, though, is not the only company Prince has established offshore. He has based at least two other companies in a country that is a well-known tax haven. According to records maintained by the North Carolina Secretary of State, Neptune Solutions LLC [PDF] and Neptune Holdings 1 LLC [PDF], both of which list mailing addresses at Blackwater’s Moyock, North Carolina headquarters and Blackwater president Gary Jackson as their manager, were incorporated in the Marshall Islands, located in the southwest Pacific, in July 2006. A little over a year later and weeks after Prince testified before the oversight committee, the Blackwater CEO filed applications to withdraw the companies’ LLC status in North Carolina. It remains unclear whether these companies are still operating, or what role they play, or were intended to, within Prince’s private security empire. Perhaps, thanks to Waxman, this is something we’ll soon find out.

(Photo used under a Creative Commons license from James Gordon.)