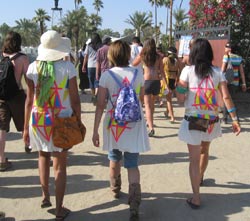 Greetings from the desert, where Day Two of the Coachella Festival has just come to a close. I know I started yesterday’s wrapup with the caveat of “sorry the photographs are terrible”; well, it’s now 2:45am, and after spending an hour sitting in parking lot traffic (after walking for 45 minutes) your intrepid reporter is feeling a little scatterbrained. So add that to the list of caveats. For those who just want to get to the meat of the matter: Kraftwerk fantastic, Portishead flawless, Prince amazing. For the details, hit the good old “continues” button. 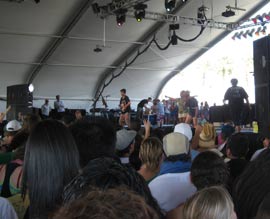 Our arrival today was slightly later than yesterday, around 4:30pm, which was just in time for the spunky excitement of Bonde do Role (right). Brazilians know their way around hot weather, and their shouty baile funk has the appealing simplicity of nursery rhymes, although I don’t speak Portuguese and I guess they’re actually really dirty. The whole crowd sings along as they go “ho-LAY,” though.

In the dance tent, Boyz Noize is finishing his DJ set with his own buzzy remix of Feist’s “My Moon My Man,” and, weirdly, Erol Alkan loses half the crowd when he kicks off his set with a remix of the Runaways that’s even more blazing. Maybe people have somewhere else to be?

The venue is definitely more crowded today, and the heat is slightly more severe: I’d like to point out that the fashion trend of “skimpy outfits” isn’t confined to the ladies, since there are far too many dudes in those mini sporty shorts with the white piping. What gives? 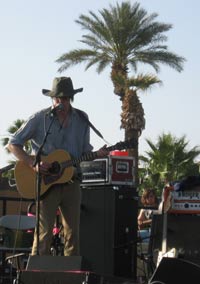 On the outdoor stage, Stephen Malkmus and the Jicks (left) are getting quirky. They’re solid, but sorry, it’s no Pavement. I guess that’s unfair, but whatever. They bring out a promotions assistant who gamely throws promotional T-shirts to the crowd.

Texan singer-songwriter St. Vincent is rocking a smaller tent with her adventurous blues. “We rode to the venue on a pony,” she claims. In the middle of a number where she’s accompanied only by her gritty electric guitar, suddenly her pedal starts emitting a high-pitched alarm sound. She doesn’t even break a sweat as she stomps on it like a bug, turning off the sound, to cheers from the crowd. 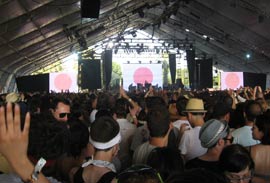 As the sun starts heading down, there’s a massive flood of people heading for Hot Chip in the dance tent. What happened, did this band get famous while I wasn’t looking? They perform a radically reworded “Boy from School,” with a bigger, more crowd-pleasing bassline. 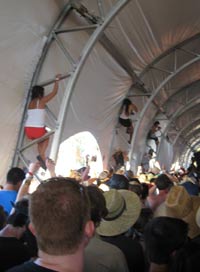 The audience is kind of crazed; maybe it’s the heat. Some young ladies have climbed up into the rafters which seems kind of dangerous.

Death Cab for Cutie are a little noodly for their main stage just-after-sunset timeslot, although “I Will Possess Your Heart” is a great song. Hanging in the VIP corral, the only star sightings from my posse were Brody from “The Hills” and somebody from the Underworld movie. Pretty sad, but who cares: Kraftwerk are about to go on! 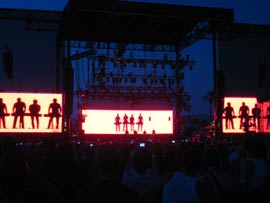 We head for a spot out in the crowd to get a better view of the giant video screens; at their dance tent performance in 2004, video was a major part of the show. They proceed to basically recreate that program, which is slightly disappointing, especially since it took a bit longer this time to switch the four band members with their robot dopplegangers. But their agenda, of exploring humanity’s relationship with technology through songs that exemplify that very relationship, remains pretty much the essential tale of recent history, so it’s not like they’re not relevant. Even more so in the post-Daft Punk “robot/human” world, since they basically stole that whole schtick from the original Man-Machines. “Autobahn,” “Trans Europe Express,” “The Robots”: we get all the hits, and then it’s “Auf Wiedersehen,” and time for the second-most-anticipated act of this year’s festival: Portishead. 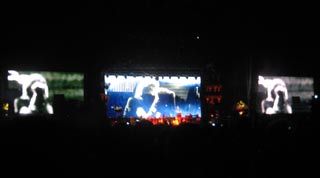 The Bristol combo’s new album, Third, has recently solidified its position as my Album of the Year So Far, and their last live show in San Francisco, back in ’98, is probably a Top Ten Live Show of All Time for me. So, expectations are high. They take the stage to a sea of cameras and screaming cheers, and launch into “Silence,” the first track from the new album. The giant video screens are showing a kind of filtered night-vision camera shot of the band, in high-contrast black-and-white; it looks like lost footage from another era, and it couldn’t be any more perfect. In the middle of “Glory Box,” the band launch into a dubby, psychedelic interlude; it’s noisy, cacophonous, and utterly glorious, a stunning 30 seconds of echoing brutality, and when they cut it off abruptly to return to the song’s loping rhythm, the crowd’s reaction is deafening approval. On “Unsure,” another devastatingly bleak highlight (lowlight?) from the new album, lead singer Beth Gibbons paints a harrowing picture of insecurity, and it occurs to me that just as Kraftwerk have a kind of “social realism” in their matter-of-fact portraits of trains and highways, Portishead are kind of social realists of the soul, facing down the darkest nooks and crannies of the lonely human condition. Their performance is flawless: Gibbons’ voice alternates between winking whisper and operatic falsetto, and the band are all astonishingly talented, whether banging away on computerized drum pads or offering a psychedelic guitar solo. It’s a triumph, and all the more astonishing considering their 10-year absence: maybe this will inspire My Bloody Valentine that it’s actually possible to come back and be just as good as you were before. 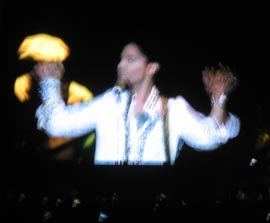 While Portishead ran a little late, the scheduled 20-minute break is all it takes for Prince to get ready, and it seems like everyone in the world has converged onto the lawn. Amazingly, he kicks off not with a Prince song, but with a Morris Day track: “The Bird.” That’s right, “bock, halleluyah.” But wait, is that Morris Day right there? Why yes it is. The band flawlessly segues into “Jungle Love,” and then the intro notes from “The Glamorous Life,” and lo and behold, that’s Sheila E banging away on the auxiliary percussion. It’s not just Prince, it’s Prince and the Prince-y All Stars! It is, of course, fantastic, and Prince himself hasn’t aged a day, skittering around the stage in a sequined white shirt thing, pronouncing “Coachella” in its proper way, with four syllables. Finally, around 15 minutes in, we finally get a Prince song: “1999,” which loses some of the synth-y otherworldiness it had on record, but gains a kind of James Brown-style funktasticness. Then it’s back to songs made famous by others: “I Feel 4 U,” which of course he wrote, since he’s a genius. “Remember the ’80s?” he asks, and as if on cue, a shot of the audience shows kids in Siouxsie and the Banshees and Sonic Youth T-shirts. Yeah, I think we do.

He segues into “Controversy,” and then into a kind of new-agey ballad version of “Little Red Corvette.” Even the stuff that isn’t working still kind of works, since a) Prince can do whatever the hell he wants, and b) his guitar skills are even more jaw-dropping than ever. Half the time his guitar seems to be playing itself (ahem), and he’ll hold one hand up in the air, casually, like “I’m not even paying attention.” Now, I’ll go out on a limb and say that for a festival-headlining show, where time is limited, we don’t really need “Cream,” “Musicology,” and the nonsensical “Seven.” But it’s Prince, and did I mention he can do whatever the hell he wants?

He emerges from a brief offstage break and shocks the audience with a cover Radiohead’s “Creep” (yes, you read that right), changing the words from “I don’t belong here” to “we don’t belong here,” and in his hands the track’s meaning seems to change from “lament of the disaffected” to “hymn of the oppressed.” It’s phenomenal. He segues into a kind of extended version of the Beatles’ “Come Together,” augmented with a chant of “War: No More.” He gives a brief, vague political speech, mentioning he’s “tired of debates,” which I take as a not-so-subtle Obama endorsement, but don’t quote me on that. It does throw into sharper relief the lyrics of “Purple Rain,” which comes up next: “You say you want a leader/but you can’t seem to make up your mind.”

With “Let’s Go Crazy,” he wraps up the show, and the big clock at the entrance reads “1:01.” There’s a flood of people towards the exits, and we begin the arduous journey that will eventually bring me to this laptop back at the rental house, where it’s just turned 3:45am. But the 1-2-3 punch of Kraftwerk, Portishead and Prince was worth not only the price of admission, but also the torture of the exit, and the sunburn on my neck.

Tune in tomorrow night to see if we even have the energy to make it back to the venue for a third day of this stuff.