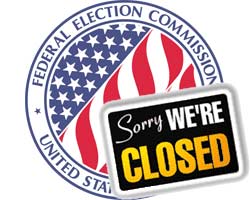 This of course will join the growing list of complaints that will go uninvestigated by the broken FEC. How many of these have to filed until the pressure on Senate Majority Leader Reid and Senate Minority Leader McConnell is so great they are forced to break their gridlock and staff the FEC? Due to a near-complete lack of public concern on the subject, I’m guessing… infinity.