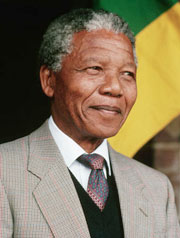 A sign that perhaps things have gotten out of control.

Nobel Peace Prize winner and international symbol of freedom Nelson Mandela is flagged on U.S. terrorist watch lists and needs special permission to visit the USA. Secretary of State Condoleezza Rice calls the situation “embarrassing,” and some members of Congress vow to fix it.

The requirement applies to former South African leader Mandela and other members of South Africa’s governing African National Congress (ANC), the once-banned anti-Apartheid organization. In the 1970s and ’80s, the ANC was officially designated a terrorist group by the country’s ruling white minority. Other countries, including the United States, followed suit.

The terrorist watch list has been, at times, a comedy of errors. Ted Kennedy was on it, as was civil rights hero and Georgia congressman John Lewis. A Marine returning from Iraq found his homecoming delayed because he was on the watch list. Babies have routinely had problems. The artist formerly known as Cat Stevens, now known as Yusuf Islam, is famously on the watch list, and Catherine (“Cat”) Stevens, wife of Senator Ted Stevens, has had trouble when flying as a result. 60 Minutes once did a segment that featured a group interview with 12 Robert Johnsons, all of whom routinely had trouble boarding airplanes.

The DOJ reported in April 2007 that the terrorist watch list includes 700,000 names, and is growing by 20,000 a month. The ACLU is hosting a countdown to July, when it anticipates the one-millionth name will be added. “Small, focused watch lists,” it points out, “are better for civil liberties and for security.”