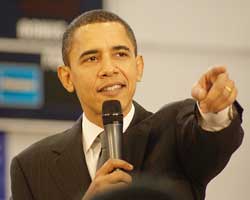 The rule-breaking Florida and Michigan primaries will count, but not as much, and not how Hillary Clinton wanted them to, the Democrats’ Rules and Bylaws Committee decided Saturday in D.C. The Clinton campaign had asked that both states’ delegations be seated in full, with full votes, according to the results of the states’ January primaries. Instead, the 30-member RBC, citing party rules and the possibility of setting bad precedent for next primary season, voted to seat Florida and Michigan’s delegates with a half-vote each.

In addition to halving the votes of Florida and Michigan delegates, the rules committee endorsed the Michigan Democratic Party’s compromise 69-59 split on Michigan delegates. It was a move that especially enraged Clinton supporters. The Clinton campaign had asked for the 73 delegates it says she won in January’s disputed primary, with 0 delegates going to Obama, who was not on the ballot. In Clinton’s plan, the 55 remaining delegates would have been seated as “uncommitted” delegates, and would function essentially as superdelegates.

Not even the Clinton campaign’s best-case scenario would have netted her enough delegates to catch Barack Obama in the delegate race. Still, today’s decision, which netted Clinton just 24 delegates, was clearly a disappointment to the New York Senator’s camp. But the Clinton campaign still had a choice. They could calmly but strongly express their disagreement with the decision, as Clinton adviser and rules committee member Harold Ickes did after the vote on the Florida delegation didn’t go his way. Or they could cast aspersions on the legitimacy of the decision and accuse the rules committee of “hijacking” the will of the voters. That’s what Harold Ickes did after his side lost the vote on the allocation of the Michigan delegates:

“I am stunned that we have the gall and the chutzpah to substitute our judgment for 600,000 voters,” Ickes said. “Hijacking four delegates is not a good way to start down the path to party unity,” he added. Then came the kicker: “Mrs. Clinton has instructed me to reserve her rights to take this to the credentials committee.”

It could be a bluff. David Corn has speculated that Clinton may simply take a few days after the end of the primaries “to confirm that her argument to the superdelegates—choose me because I have the better chance of beating John McCain—is not carrying the day.” Then, David says, she’ll probably drop out. I’m sure that most of the Democratic party leaders hope that David’s right. But on its face, Ickes’ angry speech after Clinton’s side lost the rules committee vote seems to be laying the groundwork for her to fight on in the name of fixing the “hijacking.”

If Clinton does try to fight on in the name of the “fair allocation of Michigan’s delegates” that Ickes and his fellow pro-Clinton rules committee member Tina Flournoy have already called for, she’ll have a very hard row to hoe. Ickes rhetoric about the committee “hijacking” the result represents a direct assault by the Clinton campaign on the legitimacy of Obama’s eventual, inevitable win. It is very unlikely that party leaders like Nancy Pelosi, Harry Reid, and Howard Dean will tolerate the continuation of the campaign if it seems to be undermining the eventual nominee’s legitimacy or electoral prospects. All three have expressed a desire to bring the primary race to a close well before the convention in August. Every indication is that most of the other superdelegates want to avoid a contested convention, Clinton supporters’ chants of “Denver! Denver! Denver!” at todays meeting notwithstanding.

I wrote earlier that the Clinton campaign’s response to today’s ruling, and not the ruling itself, would be the news. And despite all the wailing and gnashing of teeth from Ickes and Co., the committee’s decision has changed very little about the math of the primary race. The magic number for the nomination is now 2,118 instead of 2,026—a gain of 92—but according to Democratic Convention Watch, Obama is just 23 more delegate votes away from the new magic number than he was from the old one. At the beginning of the day, Obama needed 41 more delegates to clinch; now he needs 64.

Picking up those last 64 delegates shouldn’t be a problem for Obama no matter what Clinton does. Obama is expected to pick up somewhere in the neighborhood of 41 delegates in the final three primaries, which will leave him just 23 superdelegate endorsements away from the nomination. As the New York Times has reported, that shouldn’t be a problem “Democratic Party leaders like Senate Majority Leader Harry Reid and House Speaker Nancy Pelosi have been leaning in recent days on the superdelegates — about or more than 200 who are uncommitted — to make up their minds and announce their decisions in the coming week,” the Times says. Obama would need just slightly more than 10 percent of those remaining superdelegates to endorse him to clinch the nomination.

So today’s events haven’t changed the math of the campaign that much. What about the tone? Surely the Clinton campaign’s vocal displeasure with the results will do great damage to the party? Actually, it probably won’t.

What was most remarkable about today’s proceedings wasn’t how contentious they were, but how contentious they weren’t. Hundreds, not thousands, of Clinton supporters protested outside. There were dozens, not hundreds, of interruptions to the proceedings. And when it came down to a vote, the two most hardline Clinton supporters, Ickes and Flournoy, could only convince 6 of their colleagues to vote against the Michigan compromise. That means at least five of the committee members who had endorsed Clinton voted for the resolution that Ickes said “hijacked” the will of the voters. All 27 committee members who were present and voting at the meeting approved the Florida solution, which halved the delegation’s votes—another disappointment for the Clinton campaign. And I heard word after the meeting that the committee had the votes to pass the 64-64 split that the Obama campaign preferred for the Michigan delegates.

Today’s meeting might have seemed contentious, but it basically confirmed again what everyone already knew: Barack Obama will be the Democrats’ nominee for the presidency. MSNBC’s Chuck Todd told it like it is:

The Democratic National Committee is not somehow controlled by the Clintons. Not by the Clinton campaign any more. We may have started this campaign believing that the Clinton campaign controlled, but this is Barack Obama’s party now. He’s already been winning the outside game, he now won the inside game. Yes it’s true that Harold Ickes can threaten this stuff about the credentials, but [Clinton supporter] Don Fowler really did signal today by being for the Michigan compromise that, “Guys, it’s over.”

DNC Chairman Howard Dean opened the rules meeting with a promise of unity. “It has been a very long tough difficult campaign, but it has made our candidates and our party much stronger,” Dean said. “The cynics will look for the conflict…. We are strong enough to struggle and disagree and even be angry and disappointed and still come together at the end and be united.”

It may not seem obvious at first, but the outcome of today’s meeting showed how the Democrats are already beginning to make good on Dean’s promise.