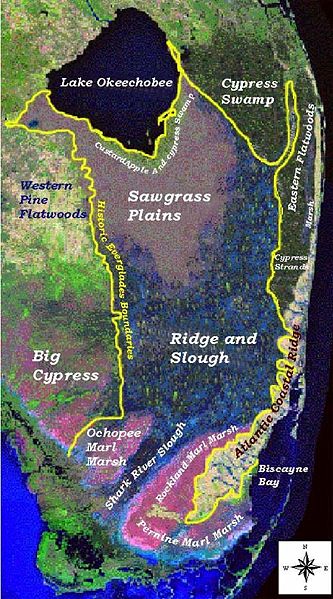 The state of Florida has pledged to buy up sugarcane farms to help restore the flow of the Everglades. For a bargain $1.75 billion, US Sugar will relinquish 300 square miles of its holdings south of Lake Okeechobee over the next six years.

Great news for the people of Florida, as well as for birds, alligators, crocodiles, and manatees. The agreement comes between Republican Governor Charlie Crist and US Sugar, reports the Miami Herald. It’s at least partially the result of the South Florida Water Management District board voting seven months ago against the practice of backpumping (pdf) dirty farm runoff into Lake Okeechobee, which then flows south into the Everglades.

That vote was the result of a 2007 court victory by Earthjustice, when a federal judge ruled that backpumping violated the Clean Water Act.

The buy-out of US Sugar will not end the Everglades’ troubles. Another 500 square miles of sugarcane farms owned by other companies remain in production. Yet the deal marks a revival of the Everglades restoration effort, the largest of its kind in the world, aimed at undoing flood-control projects that have been killing the Everglades for decades.

I spent a lot of years, years ago, in the Everglades making a documentary for Nature. Once this lush ecosystem flowed like a river, the aptly-named River of Grass. If the Crist-US Sugar deal is actually signed in September, the clock will roll backwards 100 years, giving many endangered species the first hope of survival in as many years. US Sugar’s 1,700 employees, meanwhile, have been promised retraining by the state of Florida.

It should be noted, however, that the impact of increased flows is less clear for ecosystems further downstream, in Florida Bay and the Florida Keys. The Everglades flow is being monitored mostly for phosphorus levels. The seawater end of the system needs equal monitoring for nitrogen levels. If not, expect a bigger dead zone to develop. The lesson: we need to clean all waters of more crap.