This ought to become a running segment. Yesterday, I highlighted ten races where Republican incumbents are seeing their reelections chances sink. I should have also pointed out that Republicans are having just as hard a time, if not harder, finding challengers to go against incumbents on the Democratic side. In Montana, the winner of the Republican primary and the man who will challenge entrenched Democratic Senator Max Baucus, is an 85-year-old former Green Party candidate who has raised less than $5,000. He formerly ran for president on a plan to remake Congress into a parliament.

At least this guy didn’t get the Republican nomination for the Senate race in New Jersey. But the fact that he was once the New Jersey GOP’s favored pick is kind of embarrassing.

And then there’s the situation in New York’s 13th District. That House seat currently belongs to Vito Fossella, the disgraced Republican congressman who is retiring because of a drunk driving arrest and revelations of a long-time affair and secret child. A Republican holds the seat now; it shouldn’t be that hard for the GOP to find a viable replacement who can be counted on to keep it, right? 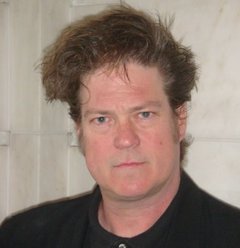 Wrong. Brooklyn Conservatives and the New York state party chair support a Republican named Frank Powers. Long Island Conservatives, however, support a Democrat named Mike McMahon. But that’s just the beginning. With Powers likely to get the nomination, his son, a 47-year-old carpenter with the same name, has announced that he will enter the race as a libertarian candidate. That photo at right is him. It is not, I believe, a mug shot. “We can’t have the Republicans take this seat again,” the younger Powers, who goes by Fran, said. “A vote for my father is a vote for the straight Republican ticket.” In response, the older Powers has started attacking his son in the press, saying that his gigs as the front man for the Staten Island band Box of Crayons and as head of an independent record label have contributed to a “carefree” lifestyle.

In response, the younger Powers shot back, “I’m not out here doing heroin… I have a regular life. Do I have a beer? Yes. I’m having one now.” Swear to God.

The chairman of the Manhattan Libertarian Party says that although Fran Powers does not have a history as a political activist,” he has been “politically active philosophically.”

So am I. I wonder if I could win this seat.