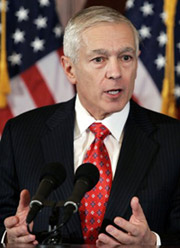 …let’s think about your comments over the weekend, shall we?

“[McCain] has been a voice on the Senate Armed Services Committee. And he has traveled all over the world. But he hasn’t held executive responsibility. That large squadron in the Navy that he commanded — that wasn’t a wartime squadron.”

This echoes a statement Clark made several weeks back: “The truth is that, in national security terms, [McCain is] largely untested and untried. He’s never been responsible for policy formulation. He’s never had leadership in crisis, or in anything larger than his own element on an aircraft carrier or [in managing] his own congressional staff.”

This is right out of the Karl Rove school of political strategy: attack your opponent’s strengths. But Clark’s actions create two serious problems for Obama.

First, while Wes Clark can make these attacks, Obama definitely can’t. Clark served, commanded troops, and was injured in Vietnam. He spent over 30 years in the military. He successfully commanded NATO forces in the Kosovo War as the Supreme Allied Commander Europe, and received the Presidential Medal of Freedom, the highest award the United States can bestow. So when Clark slams anybody on national security, he has the moral authority and professional standing to do so. But every time he takes advantage of that ability, he causes reporters to rush to the Obama campaign for response, which inevitably forces Obama or a spokesman to say something like, We honor John McCain’s heroic service and would never try to denigrate it. The Obama campaign ends up doing its opponent’s PR work.

The other problem is that it undercuts Obama’s claims that he is going to lift up American politics. How many times have you heard Obama say that American people are tired of nasty, gutter politics that divide instead of unify? Clark’s comments, while standard fare in a presidential campaign, are exactly that.

So here’s what happens when Clark goes out and says these things about McCain: (1) the Obama campaign ends up on the defensive, praising John McCain, and (2) the McCain campaign focuses on what Clark said while ignoring the Obama campaign’s response, and slams Obama for not living up to his own lofty standards. Oh, and (3) the media slams Clark for “swiftboating” McCain.”

If you believe that all that penetrates to voters are Clark’s original statements, then Clark’s behavior is good for the Obama campaign. (That’s not to say it was sanctioned by the campaign; Clark was a Clinton surrogate during the primaries and isn’t part of the Obama team in any official capacity.) If you think the context and aftermath of the statements actually matter, Clark’s contribution, on balance, has to be considered a negative one.

Obama communications director Robert Gibbs, on whether the campaign is behind Gen. Clark’s comments: “No, we’re not. … We certainly honor the sacrifice and the service and the heroism of John McCain. Those are the comments of Gen. Clark, not Barack Obama. … They both love their countries, and anyone who questions otherwise doesn’t make much sense.”