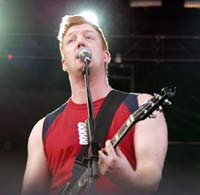 Josh Homme has issued a statement denying he’s homophobic after an expletive-laden rant he unleashed on a concertgoer which included anti-gay slurs hit the intertubes. During a performance last week at the Norwegian Wood festival, something got thrown at the stage which hit Homme, who was reportedly already grumpy after a three-day bout with the flu. He singled out the assailant in the audience and unleashed a blistering tirade of insults that’s truly awe-inspiring in scope; unfortunately, the rant included multiple mentions of “faggot” as well as references to, er, forced homosexual activities. Close your office door and feel the power of this totally, totally not safe for work clip of Homme unleashed, after the jump:

Homme’s open letter in response to the accusations of homophobia was a little weird, starting off with the “some of my best friends are gay” line and then tying itself up in logical knots:

My gay family & friends, as well as myself, KNOW I am not a homophobe. For years now I’ve known gay is not a choice; one’s skin color doesn’t determine one’s intelligence level; & red hair doesn’t mean you’re someone’s stepchild. You see, it’s not the words, it’s their intent.

“For years now”? Like, since ’03? He went on to ask if the use of “pussy” as a pejorative implies distaste for vagina, although I’m not sure he’ll make any more friends with that argument. So, we’re back here: can you use offensive words without, uh, being offensive? I don’t have any idea, but I will say that there’s something kind of erotic about his rant; while I’ve never been interested in any sort of S&M domination/submission scene, I could see myself enjoying a verbal tongue-lashing from Mr. Homme, although as the Hottest Dude in Rock I suppose he could read me the phone book and that would be fun too. It does bring to mind the odd (and I’ve always assumed, coincidental) homoerotic subtext in some QOTSA songs: “Lost Art of Keeping a Secret” features the lines “We’ve got something to reveal/No one can know how we feel,” and 2002’s “No One Knows” also features the same secret-love theme. Not that I’m implying anything here (although he signs the “apology” letter “pan-sexual spokes-thing”), but hey, Josh, if you really want to prove you’re not a homophobe, give me a call, I’ve got some ideas.