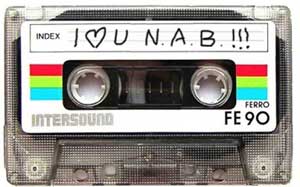 Ah, it brings me back to my early teens. With the image of an unrequited crush object fixed firmly in my mind, I’d labor for hours at my crappy Sears stereo, arranging song after song onto a C-90 cassette, in the hopes that the music would carry a message I was too chicken to voice myself: The Smiths “I Want the One I Can’t Have,” The Cure’s “Close to Me,” Violent Femmes “Add It Up.” A master of subtlety I was not. Then, the magic cassette (complete with intricately detailed cover) would be handed off to said crush object, who I can only assume listened to it for hours while longingly gazing at a picture of me. Or, tossed it in the trash.

Either way, it never really worked, but that isn’t stopping record label-funded musicFirst, who are trying to express their unrequited love of performance royalties to the National Association of Broadcasters with lyrically appropriate music this week. Cheekily calling the attempt a “four-day prank,” the organization is sending NAB president David Rehr an iTunes certificate for these songs:

Tuesday: Steve Miller Band – “Take the Money and Run”
Wednesday: Bruce Springsteen “Pay Me My Money Down”
Thursday: Paul McCartney – “Back in the U.S.S.R.”
Friday: Sheryl Crow – “A Change Would Do You Good”

Instead of just letting the music speak for itself, though, musicFirst has added helpful explanations to their tracklisting, letting us know in a press release that “Take the Money and Run” should “help remind corporate radio that, in the spirit of Billy Joe and Bobbie Sue, it is running off with property without fairly compensating the artists.” Okay, okay, we get it.

If you’re confused, radio has long paid songwriting royalties to ASCAP and BMI, but not performance royalties, claiming the publicity of playing the music is payment enough. Digital broadcasters (i.e., satellite and webcasters) do pay these royalties, and record labels have been fighting to get broadcast radio in on the deal for a while. However, one wonders where they think radio stations are going to get the cash, with radio revenue down 5% this quarter. Ah, dinosaurs: how fun it is to watch them fight themselves into extinction.