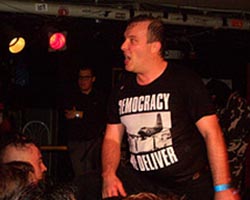 Jello Biafra, the green latex glove-wearing front man for arguably one of the 80s’ most prolific punk/hardcore bands, is celebrating his 50th birthday this week by performing two shows in San Francisco alongside the Melvins and Jello’s latest band, the Axis of Merry Evildoers, which includes members of Victims Family, Faith No More and Sharkbait. I’m told that a sweaty, shirtless Jello did his share of jumping into the crowd at Monday’s show, which was reportedly a mix of “old punk dudes” and younger folks who were born well after Fresh Fruit For Rotting Vegetables dropped in 1980.

After the jump: Ministry, who got their start that same year, gave an amusing shout-out to Jello this week:

In a Pitchfork interview with Ministry posted today, lead singer Al Jourgensen lovingly called Jello, whom they’ve worked with since 1989 on a loud, fast project called Lard, his “weird, retarded uncle.” After seeing Jello perform a few weeks ago with the Morning 40 Federation and bouncing and sweating all over the stage like it was 1984, I would have to concur; and I mean that in a good way.

Ministry is currently on its final tour as a band after about 25 years, and it feels like the end of a very loud, angry, dread-locked, black-clad era. I’ve seen them once or twice, and during their heyday, live shows were a fun, deafeningly amplified, Doc Martens-wearing affair. Anyone else remember their first album, though? Before they got tough and industrial, they were like a second-cousin to New Order or Yaz. In recent years, they’ve turned to a lot of attention to President Bush:

In the same interview, Jourgensen critiques Nine Inch Nails creator Trent Reznor for giving away his latest music for free, saying it screws over “intermediate artists” that can’t afford to give their product away. Reznor told the New York Times last week that he wasn’t interested in making money off the album, he just wanted to “blow people’s minds.” Easy to say when you’re making records in a studio inside your home in Beverly Hills.

And to close the Six Degrees of Jello loop: Jeff Ward (RIP), who played drums for the first Nine Inch Nails Lollapalooza Tour in 91, was the drummer in the original Lard lineup with Biafra. And, despite alleged label interference, Reznor and Biafra were both involved with another ill-titled Jourgensen project from 1990 called 1000 Homo DJs.