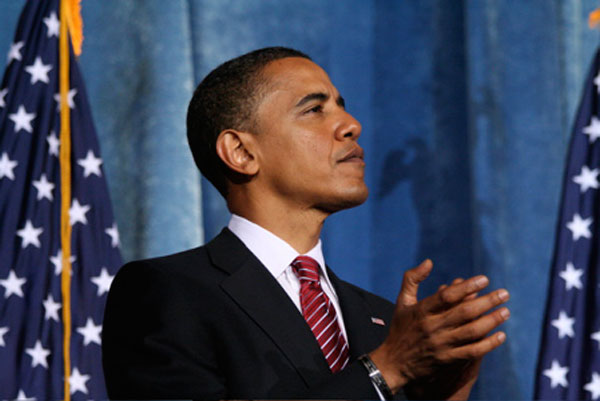 Can Barack Obama walk a political/cultural tightrope to success on Election Day?

On Monday, he gave a well-written speech on patriotism. He noted that “at certain times over the last sixteen months, I have found, for the first time, my patriotism challenged–at times as a result of my own carelessness, more often as a result of the desire by some to score political points and raise fears about who I am and what I stand for.” And unlike Democrats of the past–Michael Dukakis comes to mind–Obama is not going to give an inch in any battle over who is really a patriot. In the speech, he described the wellsprings of his own patriotism:

One of my earliest memories is of sitting on my grandfather’s shoulders and watching the astronauts come to shore in Hawaii. I remember the cheers and small flags that people waved, and my grandfather explaining how we Americans could do anything we set our minds to do. That’s my idea of America.

I remember listening to my grandmother telling stories about her work on a bomber assembly-line during World War II. I remember my grandfather handing me his dog-tags from his time in Patton’s Army, and understanding that his defense of this country marked one of his greatest sources of pride. That’s my idea of America.

I remember, when living for four years in Indonesia as a child, listening to my mother reading me the first lines of the Declaration of Independence–“We hold these truths to be self-evident, that all men are created equal. That they are endowed by their Creator with certain unalienable rights, that among these are Life, Liberty and the pursuit of Happiness.” I remember her explaining how this declaration applied to every American, black and white and brown alike; how those words, and words of the United States Constitution, protected us from the injustices that we witnessed other people suffering during those years abroad. That’s my idea of America.

Obama declared, “I will never question the patriotism of others in this campaign.” Which is not such a big promise to make. (He’s going to call McCain unpatriotic?) And he defined patriotism to include dissent (such as the whistleblowing of the soldier who first revealed the abuses at Abu Ghraib) and sacrifice. But what was intriguing was how Obama blended a championship of dissent with a belief in American exceptionalism. In fact, he noted that in order for the former to be legitimate if must be cloaked with the latter:

I believe those who attack America’s flaws without acknowledging the singular greatness of our ideals, and their proven capacity to inspire a better world, do not truly understand America.

Is this a slam of the old U.S.-is-evil, flag-burning left? Whether or not it is, in that sentence there is something for everyone. America is No. 1, and America has flaws that must be exposed, no matter how difficult, by its patriotic citizens.

Certainly, no one is likely to be elected president in the United States without embracing its ideals and without paying tribute to the national mythology. Obama, it seems, can do this well:

it may be this quality that best describes patriotism in my mind – not just a love of America in the abstract, but a very particular love for, and faith in, the American people. That is why our heart swells with pride at the sight of our flag; why we shed a tear as the lonely notes of Taps sound. For we know that the greatness of this country – its victories in war, its enormous wealth, its scientific and cultural achievements – all result from the energy and imagination of the American people; their toil, drive, struggle, restlessness, humor and quiet heroism.

Obama celebrates the myth and calls for dissent–but dissent predicated on an understanding that the United States is in essence a good and special nation. Politically, this may be an effective way out of the still-resonating battles of the 1960s, a time when some citizens defined patriotism as loving your country right or wrong and others viewed disastrous governmental policies and unjust laws as reflections of fundamental American malevolence. Obama, its been said, is a post-racial candidate. (Election Day will show if that’s true or not.) But he may also be America’s first post-60s candidate.