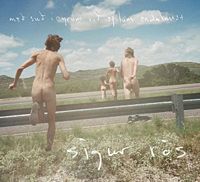 Your terribly-named DJ correspondent has made no secret of his distaste for Sigur Ros, the Icelandic combo known for dreamy, epic balladry sung in a mystical made-up language called “Hopelandic.” The band releases their fifth studio album today, Með suð í eyrum við spilum endalaust, (“With a Buzz in Our Ears We Play Endlessly”), and while it earned a respectable 7.5 from Pitchfork for tempering the falsetto silliness with a “tangle of acoustic guitars,” unfortunately, to my ears, they just end up sounding like Dave Matthews: lead single “Gobbldigook” has a hippie-dippy strum-strum dopiness that’s only confirmed by its nudey video (possibly NSFW), which you can watch after the jump.

The rest of the album either tromps over already-trodden territory, like on the nearly 9-minute “Ara batur” which gets help going completely over the top from a boys’ choir and a symphony, or tries to rev things up, like on “Inni Mer Syngur Vitleysingur,” which wishes it was Arcade Fire but is not. So, say you’re interested in some spacey, droney tunes, but find the Ros as cloying as a Lifetime melodrama. Where to turn? Well, here are five bands for those special times when you’re looking to zone out.

Stars of the Lid
This Austin duo picks up where Brian Eno left off on Another Green World, or maybe Music for Airports: instrumental music made of long-held single notes, almost classical in scope. Their latest album, And Their Refinement of the Decline, was one of my favorites of 2007, with nearly two hours of oceanic, moving tones.
“Apresludes in C sharp major”

Eluvium
This Portland-based solo artist may share his name with, you know, soil deposits or whatever, but his mostly piano-based pieces have the delicacy of Philip Glass’ lighter moments.
“Genius and the Thieves”

Explosions in the Sky
Hey, another Austin band: must be something in the water. EITS evoke comparisons to Mogwai, as both bands use traditional rock instrumentation to create soaring ambient epics, like U2 without the ego.
“The Birth and Death of the Day,” live in Seattle

Tarentel
This underappreciated San Francisco combo have moved from Low-style minimalism to epic psychedelia to electronic rhythms, and their extensive discography includes some obtuse experimental wanderings, for sure. But their first full-length album, the acousticguitar-based From Bone to Satellite, is sublimely transcendent.
Listen to “For Carl Sagan” at Last.fm

Commenters: what’s your drone-out music of choice, or do you find anything other than 2-minute 42-second pop songs a stultifying bore?