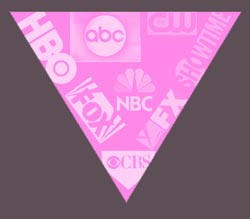 The Gay & Lesbian Alliance Against Defamation just released its annual “Network Responsibility Index,” an exhaustive look at television programming that counts the percentage of a network’s shows that feature LGBT people or characters. Once again, ABC was the queer juggernaut, so to speak, with gay-inclusive fare like Brothers & Sisters, Desperate Housewives and Ugly Betty adding up to a whopping 24 percent of the network’s prime time. The CW made it to 21 percent on the strength (?) of America’s Next Top Model, and below that, things take a turn for the pathetic. Queers show up on CBS 9 percent of the time, on 6 percent of NBC’s shows, and just 4 percent of whatever Fox does. Cable did a little bit better, as an FX viewer runs the risk of spotting a homophile 45 percent of the time, with HBO and Showtime just behind. A&E, Spike, TBS, TNT, USA all received grades of “Failing.” Bravo doesn’t seem to have been ranked, I’m assuming because it would have completely thrown off the grading curve: I’m sorry all other netverks, you are AOUUT, auf Wiedersehen.

First of all, God help the GLAAD interns who were forced to help out on this project. To come up with its grades, the organization screened 4,911 hours of network programming and 1,240.5 hours of cable programming from June 1, 2007 to May 31, 2008. That’s 6,000 hours of awesome TV fun. Can you get college credit for that? Can you even speak a complete sentence after a year of searching The Bachelor for queer content?

Interestingly, GLAAD also included the “quality” of the representation into its grades for networks; one wonders exactly how that worked out. Well-dressed gay white dudes getting married=good, flamboyant gay men of color having nervous breakdowns because their hems turned out uneven=bad? Moreover, this is television we’re talking about here, and while it’s hard to argue against inclusive representation, it’s even harder to say that lack thereof is necessarily indicative of discrimination. When asked about Fox’s failing grade, the network’s entertainment president Kevin Reilly was straightforward, saying that “sometimes you’ve actually got great representation and then for commercial or creative reasons something gets canceled and your numbers go down.” GLAAD admitted that NBC’s steep dropoff this year was largely due to lesbian Dr. Kerry Weaver leaving ER, a development I don’t think was due to homophobia.

With desperate networks increasingly pandering to ever-lower common denominators, demanding carbon copies of competitors’ shows that have even a glimmer of success, it’s hard to argue for diversity for its own sake. It’s like asking the Titanic to stop dumping sewage in the ocean: it’s all ending up there anyway. Moreover, is Ugly Betty doing gay rights any favors, and on the other hand, can networks get any points for shows that offer queer-ish metaphors for hidden difference, like, I dunno, Heroes? How about the aforementioned reality TV: is it exploiting gay stereotypes, or finally allowing “real” queers a voice? Plus, CBS has Doogie and Willow on the same show, that’s got to count for something. Ultimately, while television continues to be a pretty tough place to find queer content, GLAAD’s survey doesn’t seem to explore the complex ways fiction and entertainment interact with real life, and I’m not sure scolding networks into tacking another gay best friend onto a sitcom really helps.

[Update: Upon reflection, I see that paragraph 3 of this post could be read to imply that GLAAD was racist in their “quality” methodology, which of course is not the case, since the study made a point of taking networks to task for focusing only on white male characters. My intention was to bring up the subjective nature of judging the acceptability of queer representation in the media.]