Here’s another reason cameras are better in the wilderness than rifles or rods.

Millions of pounds of lead used in hunting, fishing, and shooting sports wind up lost in the great outdoors every year, reports the USGS. Except they’re not really lost. Only lost to the human hunters and fishers.

They are certainly not lost to the countless individuals of numerous species who eat the spent lead shot, the wayward bullets, the lost fishing sinkers, and the snagged the tackle. They are decidedly not lost to the wildlife that eats the dead and wounded animals who were shot, or who ate the lead. 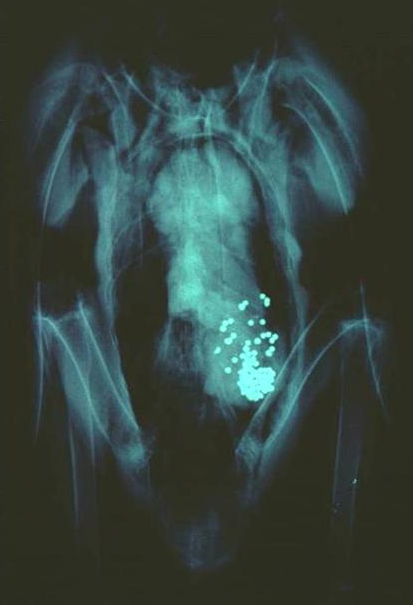 Meanwhile, roughly 4,382 tons of lead fishing sinkers are sold in the US every year. No one knows how much of that is lost.

The report notes: Lead is a metal with no known beneficial role in biological systems.

“Science is replete with evidence that ingestion of spent ammunition and fishing tackle can kill birds,” said Barnett Rattner, one of the report’s authors. “The magnitude of poisoning in some species such as waterfowl, eagles, California condors, swans and loons, is daunting. For this reason, on July 1, 2008, the state of California put restrictions on the use of lead ammunition in parts of the range of the endangered California condor because the element poses such a threat to this endangered species.”

Lead poisoning causes behavioral, physiological, and biochemical effects, and often death. The rate of mortality is high enough to affect the populations of some wildlife species. Not to mention the hunters who eat them. Is this why hunting is on the decline?

Environmentally safe alternatives to lead shot and sinkers exist and are available in North America and elsewhere. But use of these alternatives is not widespread, according to the report.

You know, this is where laws come in handy.