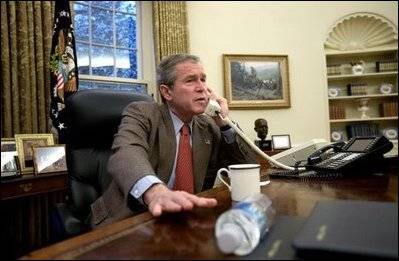 The Salon article is well worth reading, as this NSA oddity I unearthed recently while fact-checking.

The National Security Agency, apparently feeling the heat from a citizenry up in arms over their wiretapping program, released a factsheet in 2006 to clear some things up with the American public. The actual title:

Some examples of those myths:

“The NSA program is illegal.”

“It has long been recognized that the President has inherent authority to conduct warrantless surveillance to gather foreign intelligence even in peacetime.”

“The NSA program is a domestic eavesdropping program used to spy on innocent Americans.”

“The NSA program is narrowly focused, aimed only at international calls and targeted at al Qaeda and related groups. Safeguards are in place to protect the civil liberties of ordinary Americans.”

Now that Congress has handed the big telecoms a free pass for enabling government eavesdropping, can they at least throw us a safeguard to protect ordinary Americans?